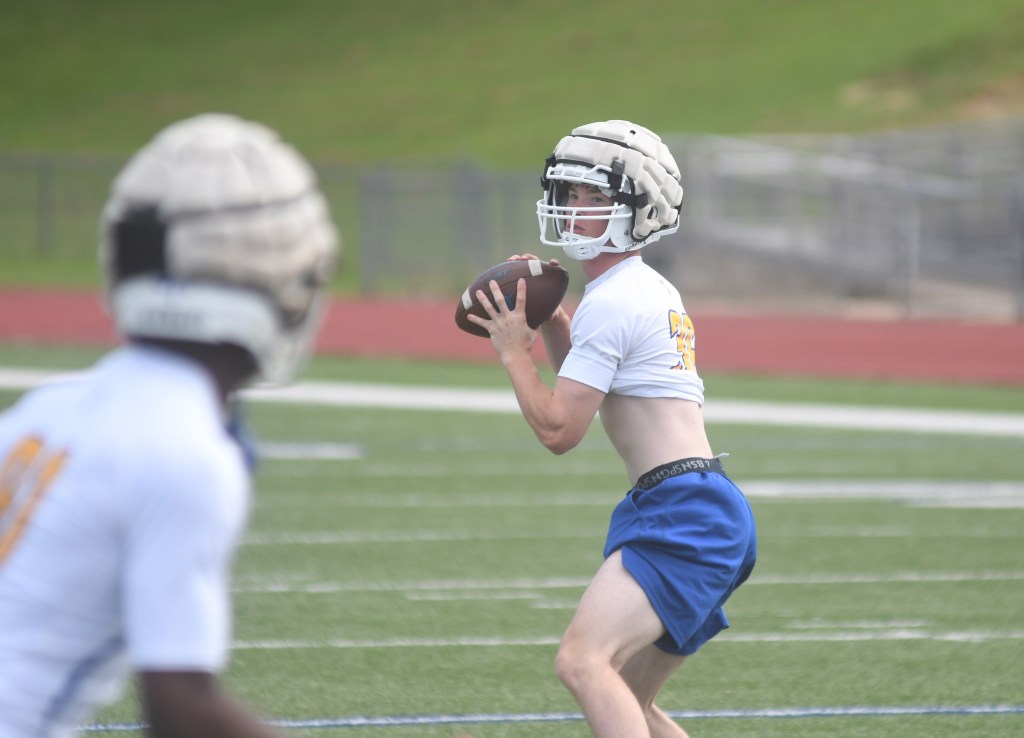 Essentially, it’s a non-contact game of football played on a 40-yard field. Just seven players line up on each side of the ball, down from the standard 11. What it does is eliminate offensive and defensive line play, as well as all rushing plays, putting an emphasis on passing work and skill position players on both sides of the ball.

But the obvious question presents itself: How well does seven-on-seven football translate itself into real football played on Friday nights?

“There’s definitely a place for it as long as you don’t live and die with it,” Water Valley head coach Brad Embry said. “This is just not what we do offensively. We throw the ball a lot, but we’re not throwing against two high safeties. Because then we’re going to run the ball. That said, I like it – we wouldn’t be here if we didn’t think it had its place. I think football in Mississippi has gotten better because of seven on sevens.”

The ‘here’ that Embry referenced was Oxford High School on a Monday morning. Oxford hosts some Monday seven-on-seven competitions just about every week over the summer. This Monday, players from Water Valley, Ripley and Holly Springs joined the Chargers at Bobby Holcomb Field for some work.

There are some positives to the differences between seven-on-seven work and 11-man football. It’s great experience to help with quarterback-wide receiver timing and helps to get reps for defensive backs and linebackers in coverage. But there’s also some things that can create flaws when teams move into fall if not properly managed.

Since there aren’t bodies flying around him, the extra time without a pass-rush can lead to a quarterback holding on the ball longer than he should or developing sloppy footwork and mechanics. They have to be careful to not fall into what Cutcliffe called “backyard football” – or essentially just waiting until you see someone come open instead of sticking with your plans and progressions.

Oxford has been hosting these seven-on-sevens since Cutcliffe was in high school. They’ll get practices and competition in at home against other schools and then go play in seven-on-seven tournaments across the state. It’s a way to get the kids some competition in the offseason, but it also builds their stamina.

As football has evolved into a more pass-heavy sports, the importance of this quarterback-receiver connection grows. As does the value of these seven-on-seven repetitions. Yet it’s still an offseason sport.

When fall rolls around, football will be played on Friday nights as it always has been, with 11 players on each side of the ball. For all the benefits of the offseason work, it’s got to end at some point.

“When we get closer to the season, we stop doing seven-on-seven and we start doing what people call pass-scale. That’s when we work on our play action and actually, real football stuff,” Embry said. “You get in some bad habits doing this, so about two weeks before season starts, we’re going to get out of those habits.”

Under MHSAA regulations, teams can’t get back to their standard, full practice routines until Aug. 2. Both Oxford and Water Valley play their first games exactly three weeks later, on Aug. 23. Until then, expect the teams to get a lot more seven-on-seven work in.