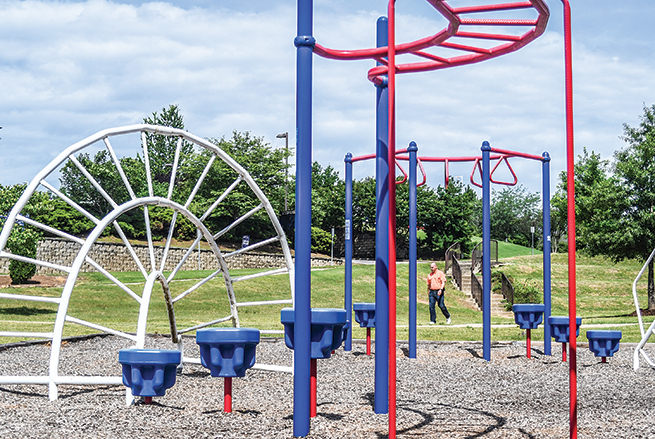 The playground at Bailey Branch Park is one of six playgrounds across the City of Oxford that were allowed to reopen this week after being closed since March due to the COVID-19. (Bruce Newman, Oxford Eagle)

Children with special needs in the LOU Community might soon be able to enjoy a day at the playground without limitations.

In partnership with the Mississippi Society for Disabilities, a group from Leadership Lafayette has begun an effort to provide playground equipment for special needs children.

The equipment would be placed at the Bailey Branch Park on Office Park Drive in Oxford. Edy Dingus leads the group ‘Play Without Barriers,’ which consists of five members of Leadership Lafayette who are using this initiative as their special project.

“We thought through our position of emerging leaders in Lafayette County, and thought about how Lafayette County is often looked to as a model for growth and inclusivity throughout the rest of the state,” Dingus said.

Dingus said the group’s research revealed just over 4,000 of nearly 55,000 Lafayette County residents have special needs, making up nearly 8 percent of the county’s population. The numbers were provided by the American Community Survey data. Dingus said her group is working with both the Oxford and Lafayette County School Districts to find out how many of their students (kindergarten through 12th grade) have special needs.

“We felt that is a pretty hefty amount of folks who may feel overlooked,” Dingus said.

Leadership Lafayette, MSD and other local organizations are joining forces in the fundraising efforts. The money would go towards a ‘first tier’ of their plan to install playground equipment at the park. The group and other donations have reached the first goal of $10,000.

With it being a multi-tiered approach, Dingus spoke to the Lafayette County Board of Supervisors during their regular meeting on Monday about them potentially investing in the playground. The cost range needed to afford equipment is $25,000 to $80,000. Dingus told the Board the lower end of the range could afford tunnels or slides and the higher range could buy a swing set for wheelchair-bound individuals.

The Oxford Park Commission’s director, Seth Gaines, is working with the group in finding ways to incorporate the ‘Play Without Barriers’ initiative throughout all the city’s parks and playgrounds. Lafayette Upper Elementary unveiled their modified playground for special needs students in May 2018.

The groups’ goal is to start work in August and have a first installation at the park by early spring. Board president Jeff Busby informed Dingus that budget sessions for the next fiscal year are beginning this week and that they would look into the group’s request at those sessions.