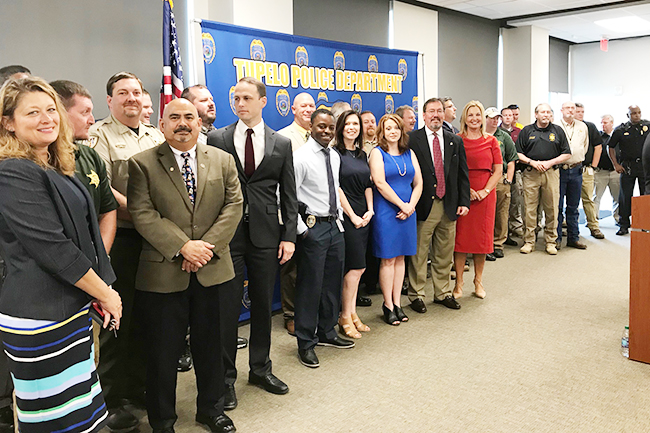 Human Trafficking has become prevalent in the northern parts of Mississippi, and to combat the crisis, a new task force was formed this week.

On Tuesday, a press conference was held at the Tupelo Police Department announcing the formation of the North East Mississippi Human Trafficking Task Force.

The Center for Violence Prevention held the press conference and is partnering with law enforcement officials from northeast Mississippi in the formation of the task force.

“We’ve got some human trafficking (cases) already working,” Sandy Middleton, executive director for the Center for Violence Prevention, said during the press conference. “We’re working with individuals who are victims from this part of the state, and the law enforcement prosecution here is chomping at the bit to get started.”

The task force is a collaboration of federal, state and local law enforcement agencies and victim service providers working to protect victims, prosecute offenders and prevent human trafficking through a coordinated partnership.

Along with other local departments throughout the northeast portion of the state, Oxford Police Department is a part of the task force. Interim chief Jeff McCutchen and detective Chad Carwile were in attendance at Tuesday’s press conference.

“If you look at the last few years, we’ve worked human trafficking cases,” McCutchen said. “They’ve come right through Oxford and we’ve had two rescues where we were able to find and protect victims. That’s what this task force is about; being able to identify and rescue victims.”

Last year, a Hattiesburg man was convicted by a federal grand jury in Oxford of human trafficking and transporting a minor across state lines to engage in prostitution. Raymorris Asencio, 31, picked up a 16-year-old girl in February 2017 while she was walking down the side of a highway. He then enticed the girl into his car. After being spotted in an Oxford nail salon, task force officers from Oxford, Hattiesburg and Baton Rouge, along with FBI agents, rescued the minor from a Baton Rouge hotel room a few days later.

In 2017, a couple was convicted for transporting a woman from Georgia to Tennessee and eventually to Oxford for commercial sex purposes.

“We’ve worked well with the FBI over the last few years in running our own operations, but this just strengthens North Mississippi to be able to put more resources in it,” McCutchen said. “More federal resources, more state resources and then to get the locals on the same page doing the same protocols, so that it gives us more training.”

In September 2017, the Center for Violence Prevention opened the state’s first and only human trafficking shelter, named The Tower, in Jackson. Last year, The Tower received 22 crisis calls and 68 referrals from July of 2018 to June of this year.