Terence Davis undrafted: what does it means for the Ole Miss product? 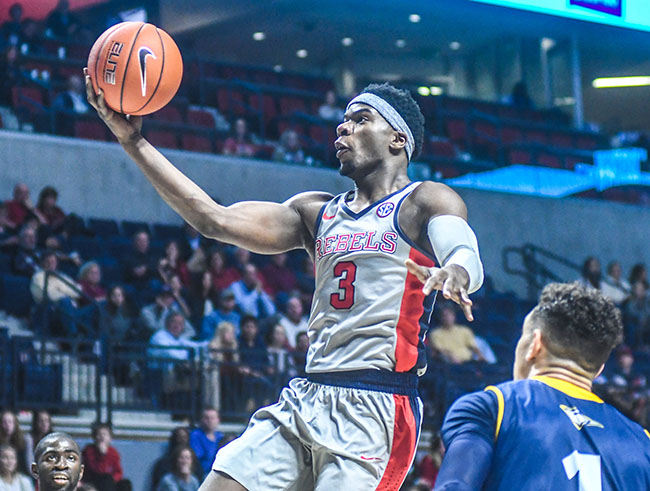 Davis’ name was not being highly spoken of a month ago, but saw his stock significantly rise over the course of pre-draft workouts and the NBA Combine. Entering Thursday evening, Davis was ranked as the No. 40 available player on ESPN. The Ringer mocked Davis at 33 overall. Sports Illustrated projected he’d go 47. Bleacher Report had him at No. 34. Yet he was not one of 60 names to hear his name called.

Each year, dozens of undrafted players end up signing with NBA teams. Following the 2018 draft, 31 players ended up signing as undrafted free agents. Davis will likely be one that does the same in 2019.

Here’s what the former Rebel going undrafted means for his future:

1. He gets to choose where he ends up

Unlike when the rest of us accept a job offer, drafted NBA players have to go wherever they’re told. Terence Davis now gets to pick his spot. Now obviously, this isn’t a location decision as much as it is a decision of where he will fit best with a team and where he can get the most chances to prove himself.

Davis worked out for numerous teams leading into the draft. Among them are the Boston Celtics, Chicago Bulls, Golden State Warriors and Philadelphia 76ers. These teams he talked to are likely the leaders to use him the way he and his agents see best, but others will certainly get a chance.

2. Positives exist in the rise of two-way contract

The NBA added two-way contracts going into the 2017-18 season. Essentially, NBA teams can sign a player to a two-way contract and then freely move them between their roster and that of their G-League affiliates.  These are the sort of contracts that will likely be available to Davis.

In the past, that transition was more difficult. Now, having a player on a two-way contract shows more of a commitment to the player and makes it harder to cut bait. When in the G-League, players make a very reasonable living wage (it was $75,000 in 2017). That number jumps to over $200,000 if a player were to be called up to the NBA.

If Terence Davis feels like it is his best route moving forward, there’s always professional basketball to be played overseas. It’s not the NBA, and you’d have to completely uproot your live and move across the Atlantic, but one can make a great living oversees.

This is an ever-evolving story. Davis is likely to sign with a team over the weekend. Check back with us online at oxfordeagle.com or follow us on Twitter @oxfordeagle and @ngabler4 throughout the weekend for updates