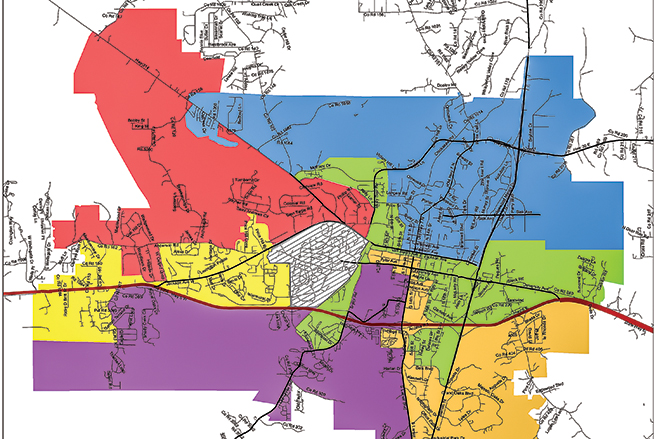 The redistricting of Oxford is nearly completed, but before any final votes are made, the Board of Aldermen wants citizens to provide one last round of input.

During Tuesday’s regular meeting the Board held a first reading of the new proposed maps of Oxford’s wards.

Before the Board votes to approve the new map, they are asking for recommendations and comments from Oxford residents ahead of their first meeting in July.

A committee met four times over a three-month period to discuss how to properly include the 10-plus miles of land the city annexed last year. Members included two residents from all six wards, who used a 12-point criteria system, which was established by Three Rivers Planning and Development. The criteria points were used to determine cultural institutions, neighborhoods and population groups that should not be split by ward lines. Each ward could not have more than a 10 percent variance in population.

A makeup of each ward’s potential demographics was provided to the Board along with the proposed map. Ward IV was the closest of the six to have a minority-majority, with 47.4 percent. African-Americans make up 39.7 percent of the ward, with other ethnicities making up the other 7.7 percent. The next closest was Ward V, with 29.7 percent.

The previous redistricting process also did not include a minority-majority ward.

“I can tell you we tried really hard to create a minority-majority ward and because of the dispersement of the minority population (in Oxford) it’s almost impossible to do,” Oxford chief operating officer Bart Robinson told the Board.

There will be a public hearing during the July 2 Board meeting at 5 p.m. where people can voice their comments, opinions or concerns over the proposed wards before a final vote is taken on the map. Anyone who has questions before the next Board of Aldermen meeting is encouraged by the City to reach out their respective alderman or contact City Hall. The proposed map can be viewed on the City’s website at oxfordms.net and is posted at City Hall.