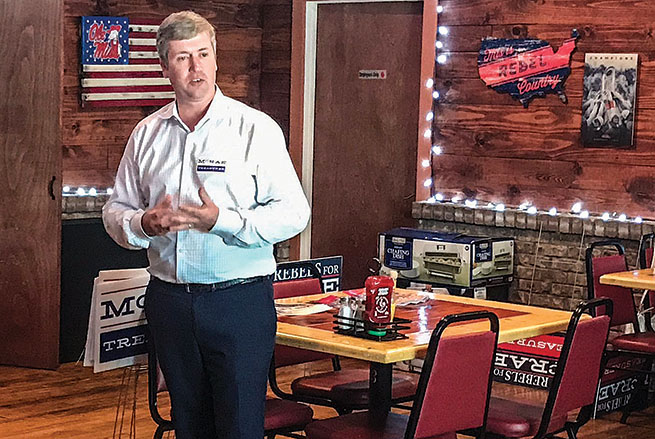 With a little over a month before primaries, the campaign trails are heating up for all state and local races.

On Wednesday, one of the Republican candidates stopped in Oxford to speak with potential voters.

David McRae is running for the office of State Treasurer for the second time, and held a meet-and-greet event at Southern Table Bar and Grill on Wednesday afternoon. It was not a large rally, but McRae said he embraces those events where one-on-on interactions occur and maximizes his time with a voter to its fullest potential.

“I do love talking to people one-on-one,” McRae said. “I think a lot of people like to talk to politicians one-on-one. They just don’t get that advantage to do that or in a situation in which to do that. I really want to make it personal with people. People get to know me, get to my family. I’m open to everything people ask about.”

The current State Treasurer, Lynn Fitch, is vacating the seat and not running for re-election. Instead, Fitch is running for the Attorney General’s office that will be vacant with current attorney general, Jim Hood, running for Governor.

McRae ran against Fitch in the 2015 Republican primary, but lost by a margin of just over 36,000 votes. This year McRae will be facing another formidable opponent in the August primaries. Longtime state Senator Eugene ‘Buck’ Clarke qualified for the state treasurer’s race in December. Clarke is also the chairman of the Senate Appropriations Committee.

“I’m very happy and honored to have that endorsement,” McRae said. “But, what that means to me is that he thinks that an outsider, a business person like myself, can really come in and shake things up in the state treasurer’s office. Can really look at money and push us in the right direction for the next four years. I’m from the outside. I don’t have pre-existing relationships with these agencies. So, we’re essentially going on a first date with each other. We’re going to start on even footing. They don’t know me, I don’t know them. So, we’re going to be able to create great, new and lasting relationships.”

McRae, a fourth-generation Mississippian, is a member of the same McRae family that is known for the McRae’s department store chain. The family business shifted over to McRae Investments, where he serves as the Equity Managing Partner. McRae is also a licensed attorney.

While stumping on the campaign trail, McRae made sure to hit home his key points to his platform, which include ensuring the voters there will be transparence in how and where state dollars are spent, minimizing and maximizing the state’s credit rating and letting the taxpayers know they are the boss and must have their tax dollars managed well.

Last year, Mississippi’s credit rating was upgraded from negative to stable and credited the improved rating to how the state was approaching pension debt, infrastructure and budgeting challenges.

“People don’t think of the treasurer as the most important job, I do,” McRae said. “It handles our money, it handles our finances, it handles our bond and credit rating. …It’s extremely important in those regards. It’s the last bastion before things really get out of hand and we have to go to the taxpayers with our hand out saying ‘we messed up.’”

The Republican primary will take place on Aug. 6 with the winner facing Democratic candidate Addie Lee Green in the general election on Nov. 5.