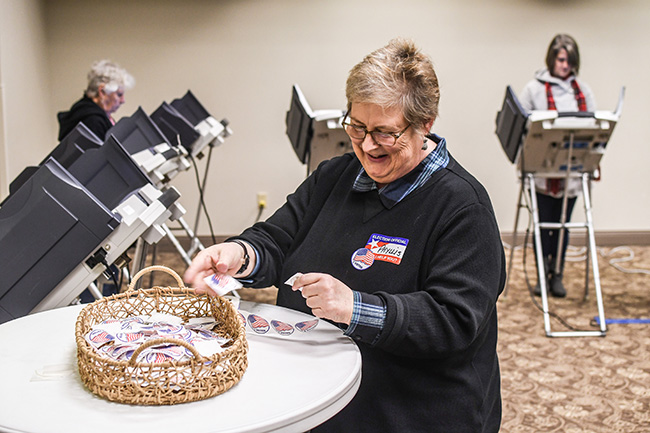 Poll worker Phyllis Johnson puts stickers that read "I Voted" in a basket at a table at the polls at the Oxford Conference Center in Oxford, Miss. on Tuesday, November 27, 2018. The Lafayette County Election Commission is looking for more poll workers ahead of November's general election. (Bruce Newman, Oxford Eagle via AP)

Next month there will be a special election held to fill the now-vacant Ward IV alderman seat for the City of Oxford, and Mayor Robyn Tannehill announced this week that absentee voting will be an option for the election.

With the special election taking place on July 2, two days before the Fourth of July holiday, a lot of people will be traveling or out of town. To accommodate those who still want their voice heard in the election, there will be an option to vote via absentee ballot at City Hall. Registered voters in Ward IV can vote Monday through Friday between 8 a.m. and 5 p.m. and will need to bring a valid form of identification to cast their ballot.

On Saturday, June 29, the clerk’s office in City Hall will be open from 8 a.m. to noon to accept any absentee ballots. On July 2, Ward IV voters can go to the Oxford Conference Center from 7 a.m. to 7 p.m. to cast their vote. The race is between Kesha Howell-Atkinson and Arnold Pegues. Howell-Atkinson is the daughter of the late Ulyssus ‘Coach’ Howell, who had served as the Alderman of Ward IV for 26 years before his sudden passing in May. Pegues ran against Howell in 2013 and fell just short, losing by 30 votes.

Regarding the rest of the local and state elections taking place this year, absentee voting will begin on Monday for the Aug. 6 primaries. Several key races are taking place in Lafayette County, including the position of sheriff and all county supervisor seats that are being contested this year.

To vote in the primary elections, either by absentee ballot or in person on Aug. 6, voters must register with the Mississippi Secretary of State’s office by July 8. The general election will be held on Nov. 5. Absentee ballots must be postmarked no later than July 8. If there are any run-off elections following the primaries, they will take place on Aug. 27.

Mississippi voters are not registered by party and voters may choose to either vote in the Democratic or Republican primary. Whichever party a voter chooses for the primaries is the party they will vote for if any run-offs are necessary.