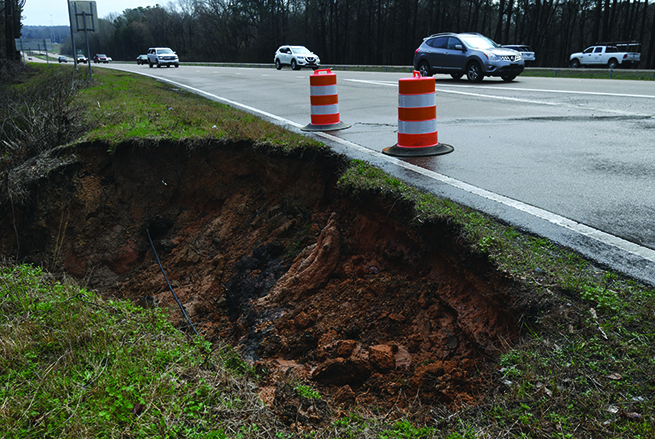 A sinkhole formed along Highway 6 East near the Lamar Avenue Boulevard exit following heavy rainfall in Oxford on February 23, 2019. Oxford’s Board of Aldermen approved the Federal Emergency Management Agency to use the city’s Emergency Operations Center as a temporary base to handle litigation claims regarding the flooding and storms that plagued north Mississippi in recent months.

The City of Oxford granted the Federal Emergency Management Agency permission to use its Emergency Operations Center on a temporary basis. The request was approved during Tuesday’s Board of Alderman meeting.

Per the license and use agreement, FEMA will occupy the operations room inside the EOC at no cost to the federal agency. They will use the premises as a public assistance office.

“(FEMA) will be covering all the flooding and the nearby tornado disasters from this part of the state,” Jimmy Allgood, Oxford’s Emergency Management director, told the Board. “They’ll be there about two months.”

The agreement goes into effect as soon as Mayor Robyn Tannehill signs it, and expires no later than Aug. 15 unless it is terminated prior to that date with 10 days notice from either party. Allgood said there will be around 12 to 15 mitigation specialists from FEMA using the room to deal with claims from victims from the recent natural disasters that struck North Mississippi.

Oxford and Lafayette County were hit with massive flooding issues after heavy rainfall totals in February. In April, several counties in Mississippi were hit with more storms, resulting in tornado damage.

Trump previously approved a February disaster declaration in December floods in 10 Mississippi counties and one in April for 20 counties for storms and flooding.