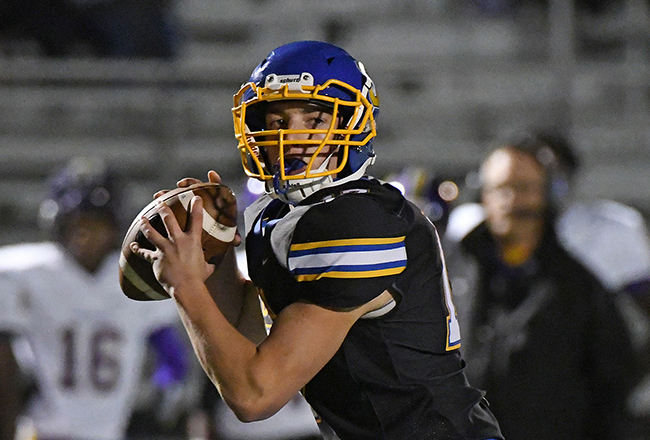 John Meagher wants to be a pilot. He wants to fly – and on Monday afternoon, he took one of the first steps toward that goal.

The Oxford High School quarterback committed on Monday to play football at the United States Naval Academy. A rising senior at Oxford, Meagher is following in his family’s footsteps with the Midshipmen football program.

“It’s been a day I’ve been looking forward to for a long time. I’ve been looking at other options beside the Academy, but honestly, I was just in church on Sunday and it was sort of Divine intervention. I knew it was the right place for me and the perfect place for me,” Meagher said. “I’ve always wanted to be a pilot and wanted to serve my country. It’s a great education and the leadership skills and things that you learn up there, you can’t put a price tag on that. It hit all the criteria I was looking for.”

Extremely honored and excited to continue the family tradition and commit to the United States Naval Academy! #GoNavy #BeatArmy pic.twitter.com/bskEsfbyar

A junior in his first year as the team’s full-time starter, Meagher helped lead the Chargers to a 9-3 record, losing just one game in their district. Meagher completed 53 percent of his passes that year for over 1,500 yards and 14 touchdowns in the air. He also added over 500 yards and 9 more touchdowns on the ground.

Now a senior, he’ll get one more crack to up his game while at Oxford before continuing with the family tradition. John Meagher’s father, Patrick Meagher, Jr., and older brother, Conrey Meagher, also went to Navy and played football.

“They weren’t really pushing me at all; they stayed out of it. I think they know for me to go to college there just because they did would be a pretty dumb reason,” Meagher said. “They were unbiased and would’ve been happy no matter what I chose. But of course, they were very happy to know that I’m going there and following them.”

Now in his second-year full time under center, Meagher said the Oxford team has a simple goal: to hoist the state championship trophy at the end of the year. He says it’s the closest-knit team he’s ever been on, and he’s never seen his teammates buying in so much in the summer.

Of course, it doesn’t hurt when you’re no longer in your first full year as a starter.

“The more you play and the more experience you get, things slow down a bit. You can see things before they’re happening and you get more of a feel,” Meagher said. “It’s confidence. Having that full year under my belt, it’ll be great for the team. I’m sure we’ll do great things this year.”