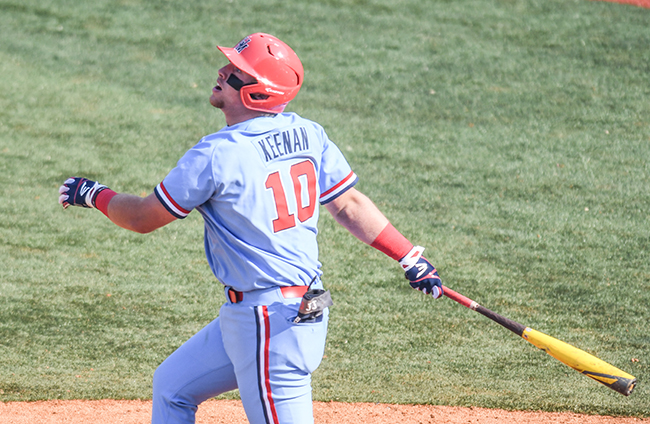 For the second year in a row, there will be an Ole Miss Rebel participating in the College Home Run Derby.

Ole Miss third baseman Tyler Keenan was named to be one of six college baseball players selected to participate in the event. Taking place Saturday at the College World Series, Keenan will get an opportunity to show off some of that Rebel power-hitting that came in the middle of the lineup this season.

The sophomore third baseman hit a team-high 15 homers for Ole Miss this season. It was the 10th-most in a single season in Rebel history. He also drove in 66 runs on the season, good for fifth-most in program history.

With their top four hitters from 2019 on average leaving for professional baseball, Keenan will be relied upon heavily next year to be the top consistent hitter in the Rebel lineup. He’ll get a chance to show that off in a fun environment on Saturday.

The College Home Run Derby includes three rounds, eliminating batters every round until the finals which is a one-on-one competition. Contestants have four minutes to hit as many long-balls as possible, followed by a ‘Bonus Ball,’ which can add two additional homers to the score.

With the selection, Keenan becomes the fourth Rebel to participate in the event – Thomas Dillard did so most recently in 2018, finishing third. Coby Bortles also participated in 2016 and Sikes Orvis in 2014. For a six-man competition, having Ole Miss get four players in the derby over six seasons shows just how consistently powerful the Rebel lineups have been lately.

Among others announced to be in this year’s competition are Kentucky slugger T.J. Collett and others to be named at a later date. The derby will take place Saturday, June 29 at 7 p.m. Central Time, televised on ESPN2.