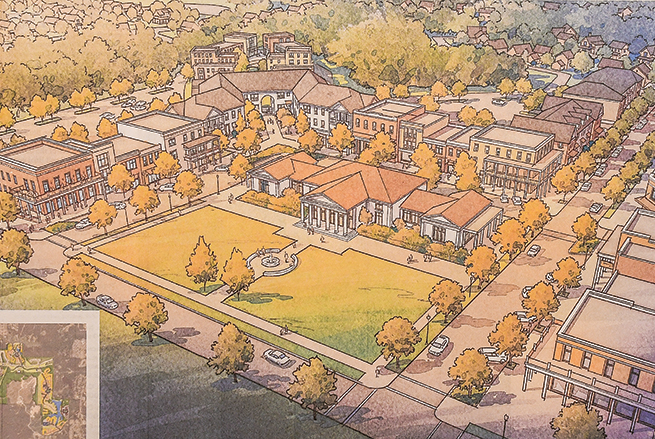 Land between Old Taylor Road and South Lamar Boulevard is set to see a massive makeover over the next 15 years.

A development company called Common Ground Urban Design + Planning is proposing a new development that would sit between the two roads and stretch across 855 acres.

The project group presented initial design plans of the land, which were approved by the Lafayette County Planning Commission during their June 17 meeting. The Planned Unit Development, or PUD, was approved, which was the only request presented to the Planning Commission. The design plans show the development company intends to use the land for residential and commercial purposes.

The land is bordered by Old Taylor Road to the west, County Road 302 to the north, South Lamar Blvd. on the east and Pea Ridge Road on the South. The proposed development would begin roughly half a mile south of The Mark Condominiums on Old Taylor Road and across from the The Church of Latter Day Saints on South Lamar.

Will Galtney and his family own the land. Galtney, who now resides in Houston, Texas, played tennis at the University of Mississippi.

Inside the development are eight planned neighborhoods, which each one have its own town center. The center will feature open space and other commercial shops.

This was the initial stage in getting the PUD off the ground, but nothing regarding site plans for any of the proposed developments will be seen for at least a year or longer, according to Joel Hollowell, Lafayette County building official and zoning administrator.

“There was a concept submitted and (the developers) would be expected to conform substantially to that concept,” Hollowell said. “There could be some variations, slightly, one way or the other. They’re probably a year away from coming to us for approval of any phases whatsoever. They’ve got a lot of questions to answer.”

A traffic study has also not be done for the project, according to Hollowell.

The next step is for the PUD to be presented to the Lafayette County Board of Supervisors for approval, which will take place next week during their July 1 meeting.