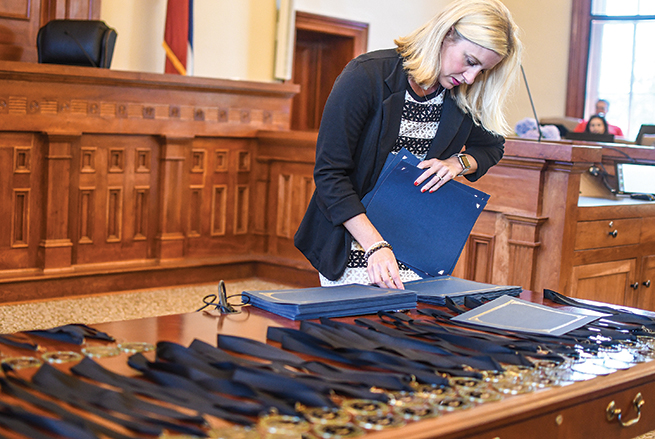 Lyndsey Woods with the Third Judicial District's Drug Court sets out certificates and medals for the graduation ceremony at the Lafayette County Courthouse in Oxford, Miss. on Tuesday, June 25, 2019. Over 40 people graduated. (Bruce Newman, Oxford Eagle)

With family, friends and supporters in attendance, 44 people took the first step to getting their lives back on track as the Third Judicial District Drug Court held its graduation ceremony at the Lafayette County Courthouse on Wednesday.

This year’s ceremony is the first in what will become an annual graduation ceremony. Since the program’s inception in 2008, there have been graduation ceremonies every six months, but Circuit Judges Andrew K. Howorth and Kelly Luther, who supervise the program, decided to hold one ceremony a year beginning in 2019.

Wednesday’s ceremony included graduates of the program from the past three months and those who are anticipated to graduate from the program within the next six months.

Former Ole Miss baseball player Derek Eaves was the guest speaker and spoke at length about his battle with alcoholism and how it led to the loss of a friend and eventually a two-year stint in prison. In October of 2012, Eaves, along with his best friend and his girlfriend at the time, was heading to a hunting camp outside of Starkville and when Eaves crashed his truck. Eaves was heavily intoxicated and took his eyes off of a road he was unfamiliar with, which led to him swerving off it and crashing. Eaves and his girlfriend survived the wreck, but his best friend did not and died on impact.

During his time in prison, Eaves said he turned to the Bible while also becoming a tutor and teaching other prisoners calculus and other subjects. Since his release four years ago, he has used his story as a way to share with others, including those in attendance Wednesday. Eaves stated he has been sober since October 20, 2012.

“At some point you have to realize, ‘This is my last chance,’” Eaves said. “I have not looked back. Not one single ounce. Not one single time. That same mentality is what you graduates here need to have, because you’ve done something awesome. You make it through the Drug Court and to make it through all the drug testing, the training, the counseling (and) the court appearances. Everything that you have to do, which seems like a lot to some of us, but you made it.”

Prior to the certificates of completion and the medals being passed out, there were three graduates who gave testimonials about their journey through addiction, Drug Court and to where they were standing on Wednesday. Each person had a distinct story, but all ended with the same sentiment of appreciation and gratitude, but also asking loved ones to continue being a support system after graduation.

“Please continue to encourage and support these graduates. Love us through our good days and bad,” Jessica Gaines said. “We have come far and have made great progress, but this is a lifetime battle.”

There are over 320 people currently enrolled in the Drug Court program, which includes Benton, Calhoun, Chickasaw, Lafayette, Marshall, Tippah and Union Counties. Each participant must spend at least three years under the supervision of the Drug Court and comply with all the program’s requirements before being eligible for graduation. Nearly 4,0000 people are enrolled in 40 drug courts across Mississippi.

“We’ve outgrown ourselves,” Howorth said at the beginning of the ceremony. “We’re going to do some things that we’re not ready to specifically talk about today to continue to try and reach people in the way that we need to.”

Howorth went on to say he and Judge Luther have discussed potential changes to the program that include additions of staff members.