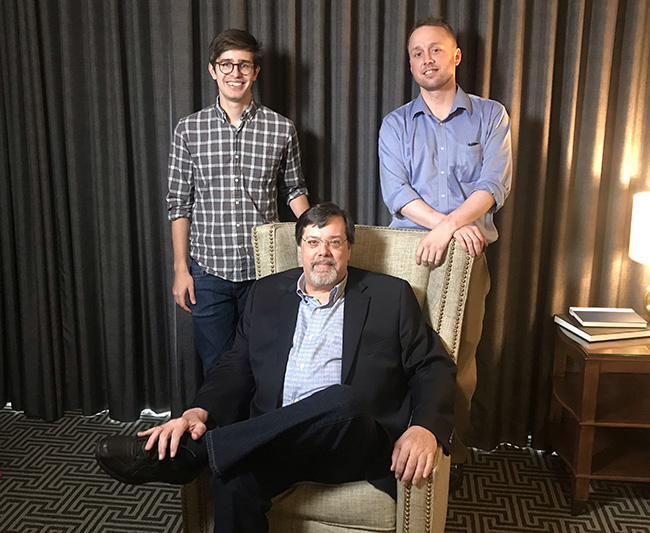 There have been several documentaries and film projects detailing the life and works of William Faulkner, but there is only one project of which the Faulkner family has given their personal endorsement.

That project just wrapped production after spending nearly two weeks in Oxford, Water Valley and other parts of North Mississippi, filming “The Past is Never Dead: The Life of William Faulkner.”

The film is a documentary that details the life of one of Oxford’s most famous writers and tells his story through three distinct periods. Director Michael Modak-Truran had three actors portray Faulkner in his youth, formative years and the final years of his life. Biloxi native Eric Roberts portrays Faulkner in his later years all the way to his death.

“That much and more,” Modak-Truran said when asked if his vision of the project played out during the 10-day shoot. “Every member of our team was really very talented. We all really shared the same vision for the project and it was really nice to kind of collaborate (with the team) to make it happen.”

Locations that are synonymous with Faulkner were used as backdrops in the film, including his home, Rowan Oak. A church and a home was used in Water Valley, with the home portraying Faulkner’s California home in the Palisades. The Chancellor’s House hotel was also used as a filming location, portraying New York City’s Algonquin Hotel, where Faulkner famously wrote his 1950 Nobel Prize in Literature acceptance speech.

The Chancellor’s House, one of Oxford’s newest hotels, already had a connection to Faulkner. In the hotel’s Library Room, several photographs of Faulkner along with some of his personal items are showcased. The photographs are part of the Cofield Family Collection.

Faulkner’s personal photographer was Colonel J.R. Cofield, the grandfather of John Cofield. John’s father, Jack Cofield, also helped with taking photos of Faulkner, and several of their works are showcased in the first floor room of the Chancellor’s House. John Cofield was interviewed by Modak-Truran on Tuesday at the hotel as part of the finishing touches with production. The interview helped provide insight into who Faulkner was through the eyes of the Cofields, some of the few people to see the writer in the midst of some of his more personal moments.

The collection was provided to the hotel with the help of John and his late brother Glenn, whom Odom noted was “instrumental” in making it possible. Glenn Cofield was murdered earlier this month while leaving a charity event in Memphis with his wife. Being able to be part of the documentary has helped bring some light into what has been a dark time for the Cofield family, John said.

J.R. Cofield moved to Oxford in 1928, when he heard the town had lost their photographer. A couple months into opening his studio, Faulkner visited to get a photograph of himself enlarged. From there, the pair hit it off. J.R. was one of the only people Faulkner would allow to take his photograph.

“Glenn and I enjoyed working side by side to expand on the legacy our father and grandfather left,” John said. “We had enjoyed that very much together. …This is film isn’t about me; it’s about Faulkner, but I’m glad to participate in it because my granddad and William Faulkner were just buddies. Before Faulkner was famous, they were just buddies.”

The post-production stage of the project will begin next. Modak-Truran said he expects that process to take up to a year at least. Distribution for the film has not been finalized.