JUST FOR LAUGHS: How Oxford is using its funny bone again 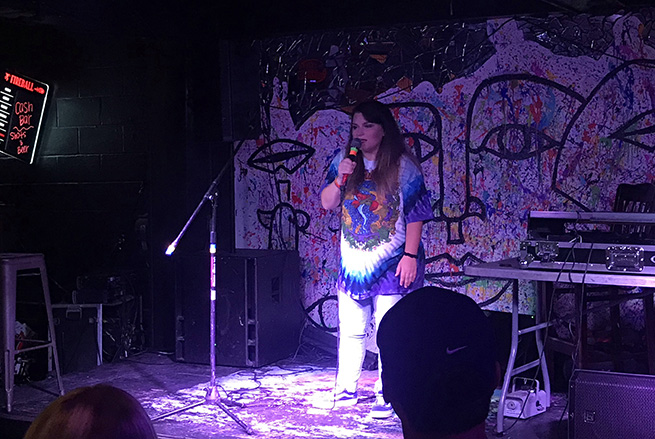 By day Connor King works his 9 to 5 job, but by night, he is helping Oxford find its smile again.

A couple years ago, a local comedy troupe called ‘Laff Co’ disbanded as people went their separate ways or life took them down a different path. After a hiatus, King is working to bring stand up comedy back into the town’s culture.

“It just kind of died down, and I always loved comedy, but I just had to stop for a while and kind of focused on work and that kind of stuff. Which can be a good thing,” King said.

A vibrant college town such as Oxford seems like the perfect place where a stand up community could thrive. A place where locals and out-of-town college students could come together to share some laughs, or even try some potential bits of their own out on a familiar crowd. But after attempts of open mic nights, improv nights and a comedy showcase on a monthly basis, the wind went out of Laff Co’s sails.

Having some time away and a chance to analyze what worked and what went wrong the first time, King said he is simplifying his approach and paring down how he goes about things this time around. Wanting comedy closer to home than a drive to Memphis also fueled King’s desire to get back into the comedy arena, he said.

“The tricky thing is that what I found is the most effective is focusing on townies and not the college kids,” King said. “When you focus on the college crowd you can definitely turn it out, but it rotates every two years or so you kind of have to rebuild it. … I just got bored and wanted to bring some comedy back here and add it to the Oxford cultural scene.”

The approach King is taking now is a weekly open mic night every Tuesday with a secret show comedy showcase once a month. So far, the results are promising. Harrison’s 1810 hosts the weekly open mic event where anyone can sign up and get their five minutes in the spotlight to make a room full of their buddies, and complete strangers, crack just the tiniest of smiles. Some walk off the stage raising their hands in success, while others end up being more of a miss than a hit.

Whatever the result, fun is had and it seems King has found something special in his new approach. King himself, who has been doing stand up comedy for six years, will grace the stage located on the basement level at Harrison’s and try out his latest material.

The secret show is exclusively for those who are lucky enough to snatch up a ticket – this past Tuesday’s show sold out in rather quick fashion. Attendees get the chance to see regional, or even national, comedians who have some experience under their belt and provide a more seasoned show than what can be found at Harrison’s every week. Finding the location of the show, which moves around to different venues each time, is half of the fun as there is very little information provided beyond ticket prices, King said.

Both events are under the umbrella of King’s new group, Oxford Comedy.

“Doing this kind of revamping of the comedy scene, I’ve just chosen to specifically focus on standup for right now,” King said. “The idea was to start some stand up to basically just to get a gauge of if there’s any local talent, local interest or anything like that. Even if this wasn’t the most talented town, I’m just trying to find people who are interested in working on stuff. Fortunately though, the people that have been coming up, it’s a pretty decent handful of them, even if its their first time to do it they are naturals.”

The next open mic night is Tuesday, July 2 at Harrison’s 1810 and the next scheduled secret show is slated for July 30. Ticket information can be found on the Oxford Comedy Facebook page.