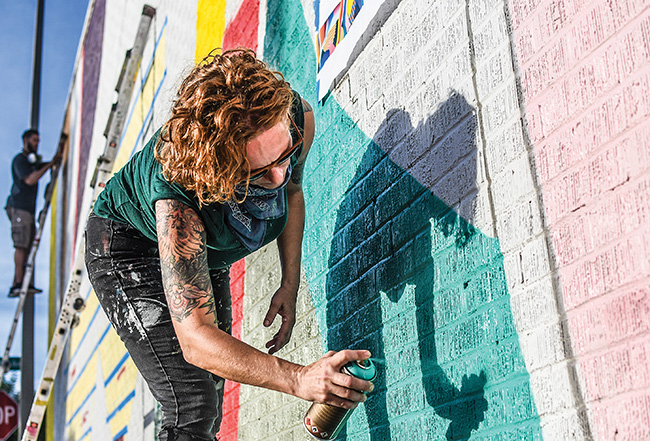 JoLean Laborde, foreground, and Wendell Brunious paint a mural on the western side of of the Sneed's Ace Hardware building, in Oxford, Miss. on Thursday, June 27, 2019. (Bruce Newman, Oxford Eagle)

The 1,800 square feet of the back of Sneed’s Ace Hardware building has been on the mind of its owner, David Shaw, for a couple years.

He wanted to something to fill the plain brick wall that faces South 14th Street, but could never come up with the right idea that would appropriately support Oxford’s art community.

Not wanting to paint something that represented one specific entity, Shaw turned to art consultant Earl Dismuke and helped find the right artists for the job. Those artists are: Wendell Brunious and JoLean Laborde, who are completing Oxford’s first outdoor mural installation this weekend.

The pair met Dismuke at a gallery in Waveland, Miss., where they were painting a mural in November. That relationship helped Brunious connect with Shaw.

“(Dismuke) orchestrated this whole thing between us and the Shaws,” Brunious said. “He scouted out the wall. He talked to the Shaws and they were all for it.”

Once the New Orleans couple was given the green light by Shaw, they submitted several ideas for the wall. The design that was selected for approval is abstract in nature and features many different shapes and a variety of bright colors. Most of the project will consist of spray paint, but some parts will be roll brushed.

The mural on the Sneed’s wall is just one of a few dozen Brunious and Laborde have done. In total, they have painted between 30 to 35 murals in locations throughout the world, including one in Korea and two in the Philippines. Other murals reside in Mississippi and Texas. They do not paint them as a two-person act, however. They have help in the form of friend, Angel Perdermo, who arrived on Friday to assist in completing the mural.

This project is the biggest mural they have created to date, according to Brunious.

Shaw, along with his wife Susan, bought the store a couple years ago. David has been involved with the business for over 20 years, dating back to when it was located on the Square.

“Earl came to me a while ago and asked what we’d like to do (to the wall) and that got us thinking,” Shaw said. “We’ve been thinking about it for a good year. The idea is, it’s supposed to be art and not just a sign, so it’s nothing Oxford. It’s just cool. We’re pretty excited about it.”

Rain came into the area on Thursday, which was the first full day work was scheduled to begin on the wall. Despite losing most of the first day, Brunious said they will still complete the project on the agreed-upon end date of Sunday.

“That just gives us the opportunity to rest right now and once it’s over, it can’t last forever, we come right back,” he said.