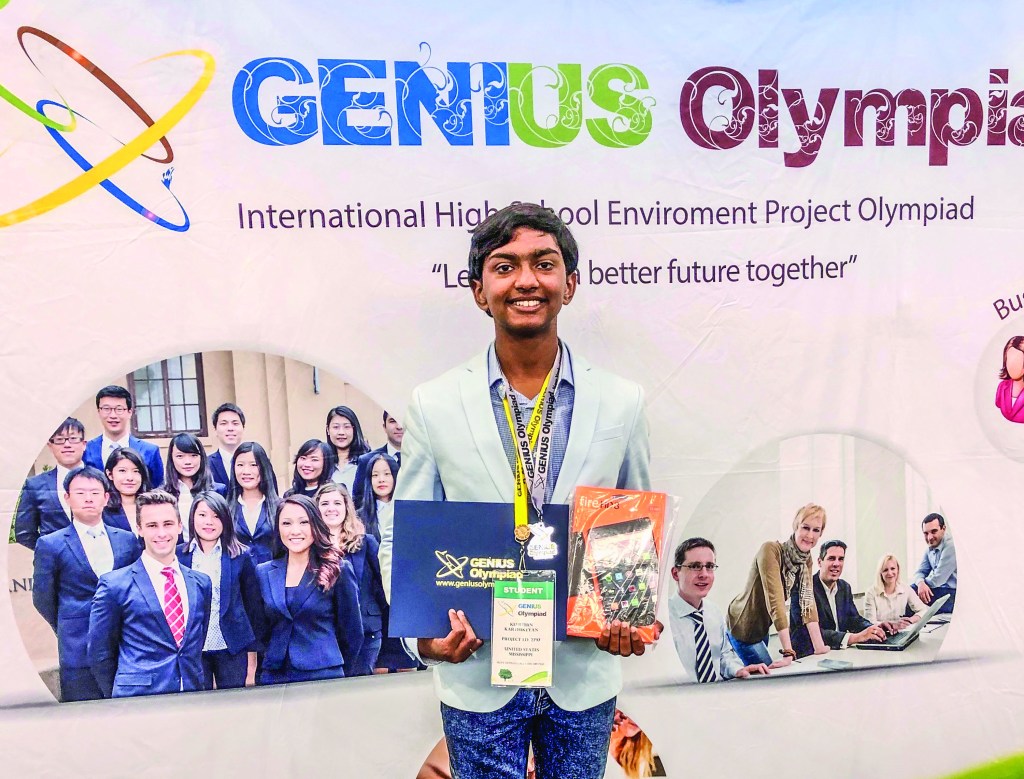 Keerthin Karthikeyan, a rising 9th grader from Oxford, won a silver medal for his research on Styrofoam at the Genius Olympiad on June 22, 2019.

Genius Olympiad is an international high school project competition about environmental issues where over 1500 participants from 79 countries and 43 States. For the Science category alone, there were 842 projects. While this accomplishment is impressive, Karthikeyan said its origins are rather humble.

“This all started two years ago, when my family went on a picnic. I had eaten an orange and put the peels in a Styrofoam cup. When we were ready to leave, I had noticed that there were little scratches in the inside of the cup,” Karthikeyan said. “Because of this phenomenon that had occurred, I did some research on oranges and other citric fruits and this is how I created my first project on recycling Styrofoam, where I dissolved Styrofoam using oil from fruits.”

This project placed first at the Regional Science Fair. Because of its success, Karthikeyan delved further into his research on Styrofoam and the effects it has on the environment. Some of the statistics that shocked him most were that 1,369 tons of Styrofoam are thrown away every single day across the world, and that it comprises 25 to 30 percent of the earth’s landfills. The U.S. alone throws away 25 billion Styrofoam cups each year. However, it grows more popular each day, and as it does, these numbers will increase, he said.

“When you think about deadly things that man has created, you think of nukes, atomic bombs, and other creations of mass destruction, but Styrofoam is one of them too,” he said. “I wanted to be able to get rid of Styrofoam and so I researched to find a way to be able to do it. However, getting rid of it was only the first step.”

Karthikeyan said he wanted to make sure the resulting material from dissolving the Styrofoam had many uses, so it wouldn’t end up in a landfill again and wouldn’t damage the environment. His inspiration for creating carbon out of Styrofoam came from his time in the Boy Scouts.

“Because I’m a boy scout, I knew that we can make charcoal (also called carbon) from wood, by ‘charring’ the wood. ‘Charring’ is the process of partial burning in the absence of oxygen,” he said. “At around the same time, through my research on Styrofoam, I learned that 92 percent of Styrofoam is carbon. I was thinking that, theoretically if we are able to get charcoal from wood, then we should be able to convert Styrofoam into carbon.”

The idea, which he turned into reality, is a substance Karthikeyan calls “Styro-Carbon.” The total process for this project began in March of last year, he said, followed by three months of research, analysis and small-scale experiments and another two months for the large-scale experiment.

Karthikeyan presented his project through five rounds of judging, resulting in the silver medal that is given to the top 90 percent of participants.

Karthikeyan is no stranger to science competitions. His work on recycling Styrofoam won first place in April at the state science fair, including the NASA Earth System Science Award and Best of Fair. He won seven awards at the regional science fair in March, including the Genius Award that landed him an invitation to the national competition at SUNY Oswego.

As a silver medalist, he is invited to submit his research to the International Journal of High School Research to have it peer-reviewed and published.

This long list of accomplishments is something Karthikeyan said goes beyond his wildest dreams.

“I am really excited because I never thought that this project could go as far as being published in a scientific journal. It’s really amazing because my work will be recognized and will be reached out to scientists at an international level,” he said. “Actually, some of my judges even suggested me to patent this method before publishing. Once patented, if investors are interested, then this method could be developed and expanded into a larger scale that could even eradicate world Styrofoam pollution. It’s exciting just thinking about it.”

While his future plans are changing every day, Karthikeyan said he wants to one day become a pediatrician. To do this, he said, he’s going to work hard and earn scholarships in order to attend a high-ranking medical school – preferably in the Ivy Leagues.