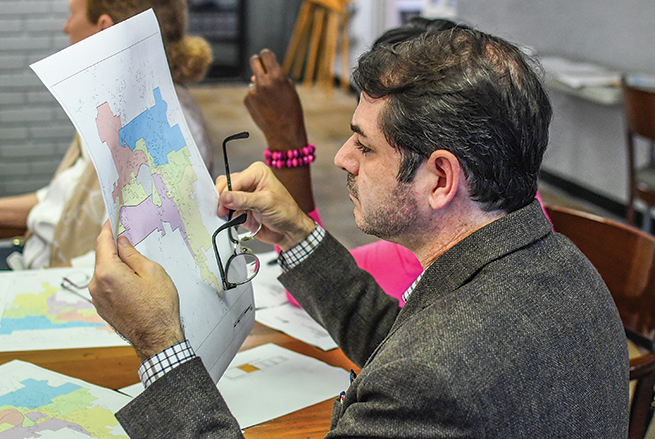 Jason Derrick looks over a map during a meeting of the Oxford Redistricting Committee in Oxford, Miss. on Tuesday, April 9, 2019. (Bruce Newman, Oxford Eagle)

After months of meetings, discussions and planning, the City did not approve the newly proposed map devised by the Redistricting Committee on Tuesday.

During their regular meeting, the Board of Aldermen decided not to move forward with the proposed map, citing issues with population distribution.

The Redistricting Committee spent the better part of this year working to find the best way to include the nearly 11 miles of annexed land that the city took over last year, but their results were not to the Board’s, or the City’s, liking.

A public hearing and a proposed vote on the map was scheduled for Tuesday’s meeting, but before that could take place, Bart Robinson, Oxford’s Chief Operating Officer, recommended against using the proposed map, and instead recommended hiring someone to find the best solution. Three Rivers Planning and Development had been working alongside the committee during the process.

The biggest concern from Robinson was the nearly 13 percent variance in population between the six wards. The threshold was set a 10 percent deviation from the 3,700-population average of Oxford’s total population of 22,742 assigned to each ward. Wards II and V deviated by more than six percent. Ward II was a deviation of -6.18 percent and Ward V was a deviation of 6.35 percent, totaling 12.53 percent.

The population numbers from the 2010 Census are what the committee used, which made it difficult to keep the deviation in each ward under the recommended 10 percent. Mayor Robyn Tannehill also acknowledged the City will have to do this process once again fairly soon, with updated population numbers.

“Once the census is done in 2021 we will have to do this all again,” Tannheill said. “That becomes the frustrating part. Now we pay someone to do this. We tried to do it with free help from Three Rivers and not taxpayer money to get this project done.”

Having to deal with outdated population data and the 11 square miles of annexed land put the committee in a difficult situation of meeting every requirement tasked to them, according to city attorney Pope Mallette.

“We are nine years out from the last redistricting, we have just completed annexation and it’s the largest annexation in the city,” Mallete told the Board. “We’ve lost an alderman, which also threw a little bit of a complication in the timing issue, but we worked through all that. To be generous to the folks that helped us, this has been a very difficult end of the cycle. We just need one more look before (I) ask y’all to vote.”

No action was taken, but the Board granted Robinson the ability to seek out a consultant and present contract terms and a proposal during their July 16 meeting.