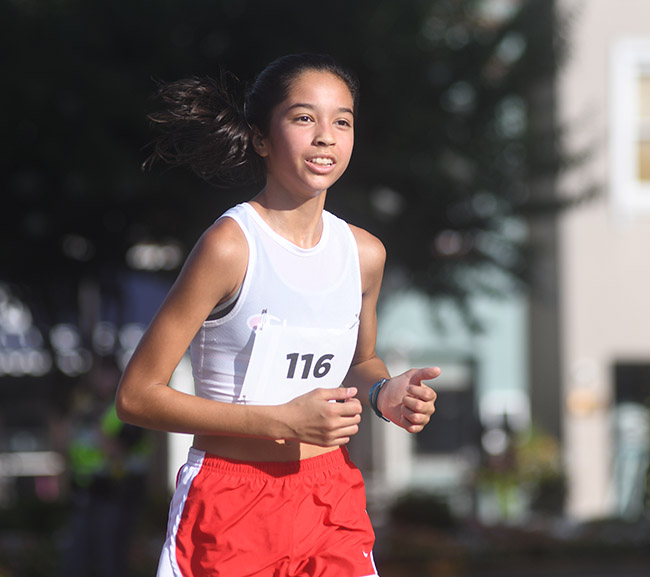 Mia Dawson was the first female runner to cross the finish line in the Freedom 5K, in Oxford, Miss. on Thursday, July 4, 2019. (Bruce Newman, Oxford Eagle)

Charlie Dawson had already grabbed his water and was back cheering on the other participants by the time the third runner rolled through in Thursday’s 4th of July Freedom 5k. He was in the same spot when his daughter rolled through, just minutes later.

Charlie Dawson ran track back when he was in college. He describes his races back then, running as low as 14.50, when he was “fast.” Most would say his 17:23 is pretty darn fast for a guy in his 40s, but he also ran around 16:30 just two months ago in cooler weather. 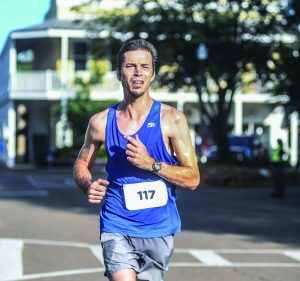 “Man, I was trying to go a lot faster I just didn’t have it in me,” Dawson said. “Really it’s just awesome out here. The atmosphere is great and everyone’s running. I’ll run pretty much any race around here I can get to.”

Dawson had the lead from the start and just sort of pulled away a bit throughout the race. Kyle Rock, also from Oxford, finished not too far off Dawson at 17:39.88.

Now Charlie’s daughter, Mia, will be a freshman in high school this year at Lafayette. But she’s been competing at the high school level since she was in seventh grade. Last year, as an eighth grader, she finished second in the 3200-meter run and fourth in the 1600-meter. Thursday she won the Freedom 5k with a big jump from her previous race.

“That’s a great time for her. She ran in the 24s the last one she ran,” Charlie Dawson said. “I can’t believe she ran so well. She’s been training really hard this summer.”

Over 200 runners came out for this year’s 4th of July 5K, benefitting MS Critterz. At $30-35 per registration, depending on how early one signed up, the race raised over $6,000.