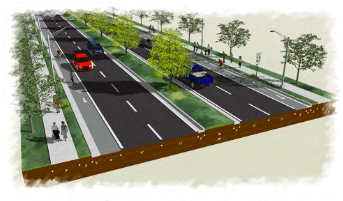 The roadmap for Oxford and Lafayette County’s infrastructure system over the next 25 years has been given the green light.

During their respective meetings this week, county and city officials approved the final draft of the LOU Transportation Plan, completing a 15-month process that included meetings, public hearings and planning sessions.

During Monday’s Lafayette County Board of Supervisor’s meeting, the final draft was approved without discussion, though District 1 supervisor Kevin Frye provided some comments regarding the comprehensive plan to improve the county and city’s roadways.

The purpose of the LOU Transportation Plan is to serve as a guidebook for those who will make decisions when implementing a transportation improvement program that addresses existing and future needs.

“We’ve spent, I guess it’s been over a year at this point, working on this plan and certainly as members of the Board of Supervisors we hear regularly from our constituents about bridge issues, about traffic and about what the county can and should be doing about these things,” Frye said during the meeting. “I’m excited that we have a plan. …Now we have a plan and we’ve got a lot of investing to do to keep up with what we’ve said are our priorities.”

The process to present a comprehensive plan that includes three different time frames for when projects will begin and be completed began in November of 2017. The University of Mississippi, Oxford and Lafayette County formed the joint effort after Oxford’s Board of Aldermen approved an Interlocal Agreement between the three parties. The city also entered into a contract with Waggoner Engineering out of Vicksburg who conducted a transportation study.

A final public hearing was held on May 3 where residents of the LOU community could come and see the final plans and which categories proposed projects fell into. They were also encouraged to voice concerns and issues with any of the projects listed and were taken under consideration before the final draft was presented this month. One of the biggest issues several residents had was a proposed roadway that would connect County Road 326 to Old Taylor Road while crossing through the South Campus Rail Trail. That one project drew the biggest ire and pushback from residents and it was taken out of the final draft of the Transportation Plan.

During Tuesday’s Alderman meeting, Mayor Robyn Tannehill pointed out that project was no longer part of the plan and gave comments on the overall Transportation Plan before the joint resolution was unanimously approved by the Board.

“We’ve worked on this for so long and is the first of its kind of a truly joint project, both time investment and financial investment from the city, county and university,” Tannehill said. “I think that’s huge.”

One major roadway project that has already been underway is nearing the first phase of its completion. During Tuesday’s meeting Mayor Tannehill noted the striping and signage placement along West Oxford Loop Extended would begin next week and Phase 1 of the project would open to citizens later this month.

The entire LOU Transportation Plan can be viewed here.