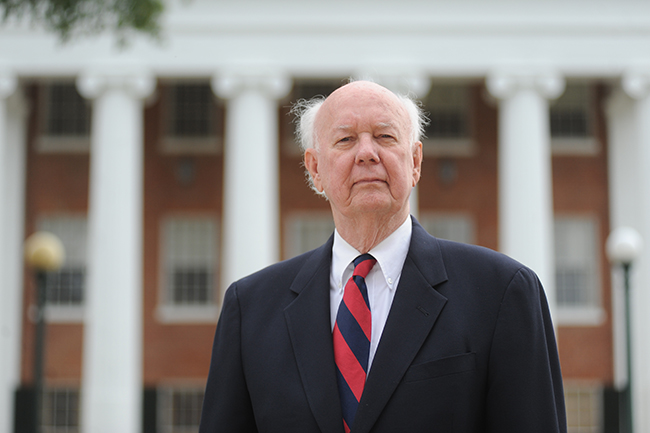 David Sansing, outside the Lyceum at the University of Mississippi, in Oxford, Miss. on Friday, September 9, 2016.

David Sansing, a longtime University of Mississippi professor and historian, passed away at the age of 86 on Saturday.

Sansing died at a Memphis hospital after suffering a fall at his Oxford home on Friday.

A professor emeritus at Ole Miss, Sansing was also a writer and spent his career telling the history of his home state. He was author of the definitive history of the University.

“We are deeply saddened by the loss of David Sansing,” Noel Wilkin, Ole Miss provost and executive vice chancellor for academic affairs, said in a statement. “He was an outstanding University citizen who made substantial contributions to our university. It is a sad day for the entire university community, and he will be greatly missed.”

Sansing published dozens of scholarly papers and authored more than a dozen books and textbooks focusing on various aspects of Mississippi history, including “The University of Mississippi: A sesquicentennial History,” “Making Haste Slowly: The Troubled History of Higher Education in Mississippi” and “Mississippi Governors: Soldiers, Statesmen, Scholars and Scoundrels.”

His final book, “The Other Mississippi: A State in Conflict with Itself,” was published in 2018 as a compilation of articles, essays, speeches and lectures given throughout Sansing’s career. The 2013 textbook, “A Place Called Mississippi,” is still in use in public and private high schools throughout Mississippi.

The Greenville, Miss. native began teaching history at Ole Miss in 1970. Sansing was named the Teacher of the Year in 1990.

“I think he was just highly passionate about his students and the classes that he taught,” former student Jeff Roberson said. “You got that from a lot of teachers, but his seemed to be above and beyond in an interest in his subject and his students. That counted even after they had graduated or they were gone from (Oxford). There was a connection there that, when you saw him, he was interested in catching up and being engaged with his former students.”

Roberson took five of Sansing’s classes during his time at Ole Miss.

State officials also took time to remember and honor Sansing following the news of his passing, including U.S. Senator Roger Wicker, who was also a student of Sansing’s.

“David Sansing was my professor and friend for 50 years,” Wicker tweeted on Sunday. “Remembered me as a far better student than I actually was – What a loss for Mississippi!”

Sansing is survived by his wife, Elizabeth, and his three children. A memorial service for Sansing will be held at Paris-Yates Chapel on the Ole Miss campus at 4 p.m. on Wednesday.