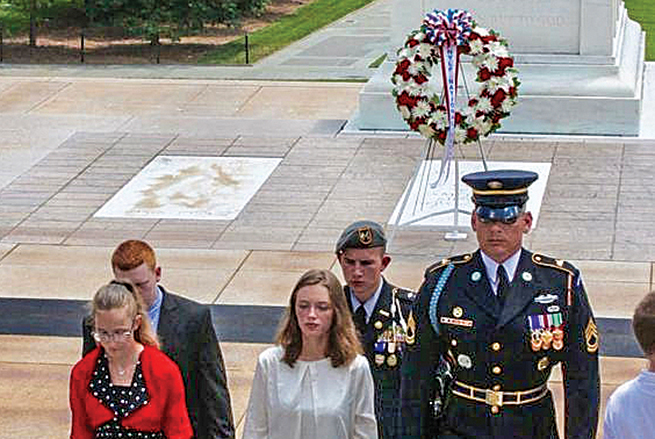 Oxford High Camille White, center, was one of four participants chosen to place a wreath on The Tomb of the Unknown Soldier.

When Camille White attended a national conference in Washington, D.C. last month, she had no idea about what was to come next.

Four people would be chosen based on their essays to lay a wreath on the Tomb of the Unknown Soldier, and the topic of the essay was why they should be selected. With a long line of military history in her family, White chose to write about what she knew best. Her father, Jamie White, is enlisted in the Army National Guard Reserves.

“It was kind of hard to get going, but once I got going I was like, ‘OK, I can do this,’” White said. “I was honestly kind of surprised that they chose me, because so many people (wrote an essay). I was just honored to be a part of such a solemn event.”

White, who will be a senior at Oxford High School this fall, was nominated with two other classmates to attend the conference. Mylene Cromwell, a social studies teacher at OHS, and Daniel Parrish, a history teacher at OHS, nominated White, who was the one student selected out of the three to go.

During their week in D.C., White and the rest of the attendees toured the Federal Bureau of Investigation’s headquarters as well as the Pentagon. This was especially exciting for White, who said she wants to have a career in the national security field.

Two boys and two girls were selected to place the wreath. They were taken in a separate van and arrived at the cemetery earlier than everyone else, allowing them to see the tomb in a private setting. White had previously visited the cemetery and the tomb once before when she was younger, but said last month’s experience has a much deeper meaning.

“The soldier came up and met us and asked us our names and where we were from and he took us (to the tomb),” White said. “It was such a solemn event and I was overwhelmed with emotion. …It didn’t impact me (as much) when I was younger.”

White has plans to attend Harding University in Searcy, Ark. after graduating high school, and hopes to major in political science or government.