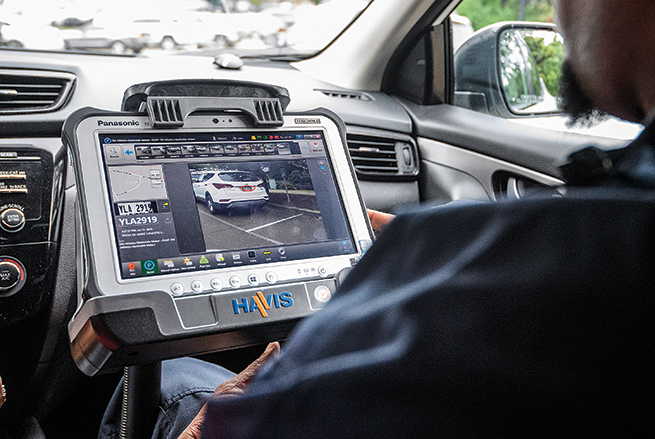 The Auto Vu system scans license plates and uses software on a laptop inside the SUV to check them against a database of registered vehicles on campus. (Thomas Graning, Ole Miss Digital Imaging Services)

The way parking permits are purchased or used could be changing in the coming years at Ole Miss.

The University’s Department of Parking and Transportation is testing a new system that involves an automatic license plate recognition system. The new system would improve efficiency and could be more user-friendly, according to a release from the University.

The Auto Vu system, which is being used at other universities throughout the country, uses a camera mounted on an SUV to scan license plates. Then, software on a laptop checks the plates in a database of registered vehicles to determine if the car is registered on campus for the parking lot it is in. If the car is in violation, the driver would then be ticketed. The new system would issue emailed citations to the driver instead of leaving a printed out citation on the windshield, as is the current practice.

If Ole Miss decides to implement the new system, it would cut down costs at an estimated $100,000 a year, as well as eliminate the need for hangtags or window decals.

“I think that it can definitely be beneficial to use a tag scanning system to move towards a more technological method, especially when the university can potentially save thousands of dollars per year and reduced the amount of resources required to develop the product,” Michael Lawrence, a journalism major at Ole Miss, said. “That money can then be utilized for other necessities. I just speculate on the system’s design, if the vehicles they use will have the scanner device attached to the car and look similar to those Google Earth cars you see from time to time.”

The university began testing the system in March, and if it continues to test positive and function how it is expected to, it could be phased in over the next two to three years. The system will also provide improved reports on parking lot usage, which will help the parking department better maximize the availability of parking where it is needed most.

Moving towards a hangtag-free system will depend on faculty, staff and students to update their tag numbers. The interface on the parking department’s website allows those with permits to update their registration instantly if a driver gets a new license plate or changes vehicles.

“It’s working well right now,” Mike Harris, director of parking and transportation at Ole Miss, said. “We’re running the LPR system at the same time we’re still issuing permits. We want to give it some time to see how accurate it is and whether it is going to work. This is a trial period to see if this is where we want to go in the future. The goal is, however, to go to electronic permits. Then, your license plate would be your actual permit.”

The University of Southern Mississippi and other institutions in the state are transitioning to the same technology.