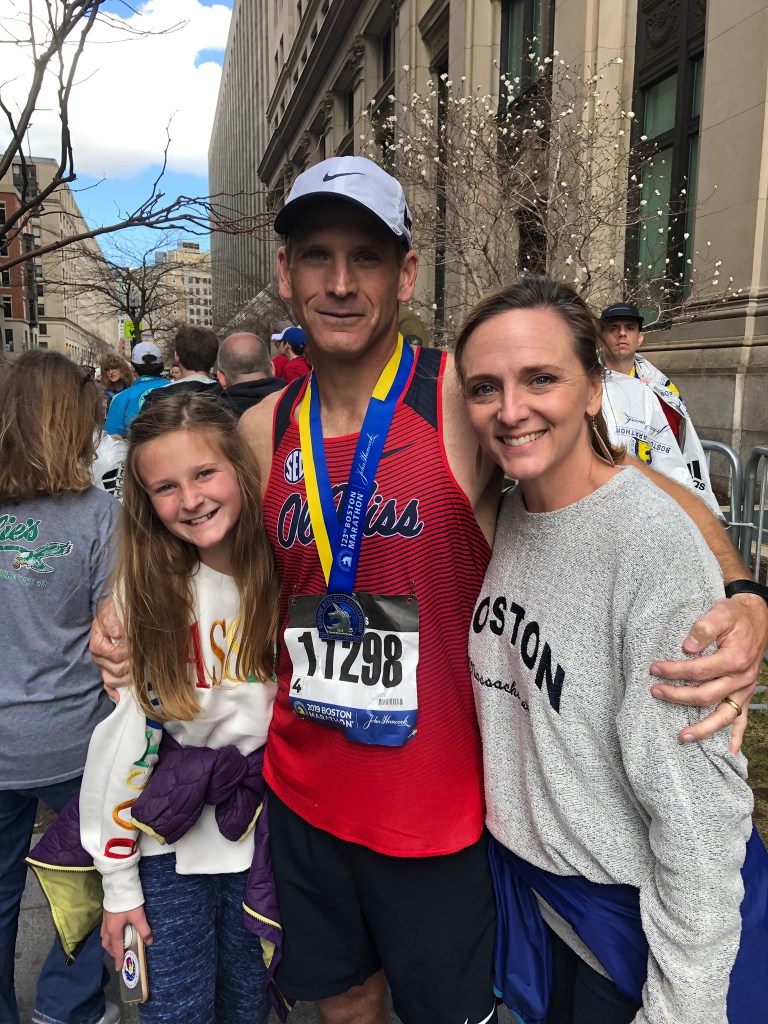 Singletary celebrates with his family following the completion of the Boston Maraton (photo via. Ole Miss Communications)

Shannon Singletary was quite a long way off when he decided to start attempting to train for the Boston Marathon just a few years ago, but this April, he completed the race for the first time.

The Boston Marathon is essentially the top prize for amateur adult distance runners. Not only does it have qualifying standards, unlike the standard marathon, but the standards are quite lofty. Singletary, the co-director for the Ole Miss Center for Health and Sport Performance, had never really thought of himself as the running type. Now, he’s completed four marathons including the gold standard.

“I’ve always been into weightlifting and some endurance, but I was never into marathon training,” he said in a recent news release. “Long story short, I ran the Double Decker 10K here, and a buddy of mine, Bret Beauchamp, who has ran the Boston Marathon 12 years in a row, looked at my times and said to me, ‘You give me two years and I’ll have you qualified for the Boston Marathon.’ I told him, ‘I’ll give you two years, but there is no way you’ll get me there.'”

For his age bracket – Singletary is 46 years old – he had to run a 3 hour and 25 minute marathon or better just two qualify for Boston. That’s just about 7:49 per mile over 26.2 miles. He completed his qualifying race in 3 hours and 17 minutes. At Boston, he was even better, finishing the race in 3 hours, 15 minutes and 53 seconds. His time was good enough to re-qualify himself for next year’s race.

Thankfully for Singletary, he had quite a bit of help through this journey. Working at the Center for Health and Sport Performance at the University put a handful of qualified dietitians and strength coaches at his disposal, aiding in his workout design and training regimen, something that was relatively foreign to him coming in.

The center usually provides a sort of sports medicine consulting, nutrition services and other performance-based training services to high schools and colleges. This time their help went internally.

Singletary’s training regimen included everything from long runs, maxing out around 22 miles, to speed and interval work on the track. The variety of distance and track training allowed him to build up his endurance base while not sacrificing the ability to contribute bursts of speed at a given time. The successful training paid off, and it looks like marathon training will continue being part of his life moving forward.