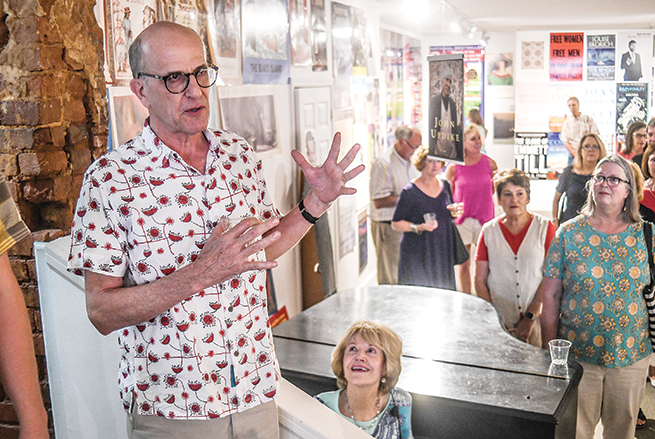 Through 40 years of operation, Square Books has accumulated a lot of items, many of which eventually ended up in storage.

To kick off the landmark anniversary, owner Richard Howorth had an idea to dust off some of their collection and showcase it to the public.

“We’ve kept these posters over the years and stored them in various places, and we were cleaning out one of those rooms where many of those posters were kept and in the process it just sort of occurred to me that maybe Wil (Cook) would be interested in doing a poster installation in the gallery,” Howorth said. “(Cook) was instantly enthusiastic about the idea and that was that.”

From idea to installation was a process that took maybe a month, Howorth said. The poster exhibit opened on Tuesday and Square Books held a reception to kick off the month-long installation on Thursday.

There are various types of posters, ranging from sturdy foam board to countertop promotional signs to traditional glossy posters. Nearly every genre is covered in the installation, ranging from John Grisham and William Faulkner to Michael Oher and the Mannings.

The posters have a vintage and authentic look to them, showing the effects of being on display in their respective bookstores over periods of time. Despite being in storage all these years, Howorth was surprised by how many had battle scars, yet nearly all were still fit for display.

“Almost all of them have been taped up or tacked up or put up and displayed in some way,” Howorth said. “We managed to get them up on the wall.”

Not only can the public come and walk through the installation to reminisce about some of their favorite works or get taken back to a time when their favorite book was released; they can leave with a piece of history. Each poster has been priced and is for sale, much like any other art exhibit. The prices are varied based on condition, importance and if they are signed.

Howorth has a poster signed by Oher, one signed by former St. Louis Cardinals manager Tony LaRussa and others on display and available for purchase.

“Some of them are somewhat valuable, I suppose,” Howorth said. “Those are a little bit pricier than most of them because they are collectable. …What are we going to do with these posters? We don’t need them, but they remain interesting. I’m not sure I’ve ever thrown any of these posters away, because it’s an interesting artifact and it means something. We’ve just held on to them.”

The poster exhibit will run through Aug. 3 and the gallery is open Tuesday through Saturday from 10 a.m. to 5 p.m. and on Sunday from 11 a.m. to 3 p.m. Square Books will celebrate their 40th anniversary with a party at the Lyric on Aug. 24 from 7 to 10 p.m. RSVP for the free ticketed event through Eventbrite.

Lights for Liberty vigil to be held at City…