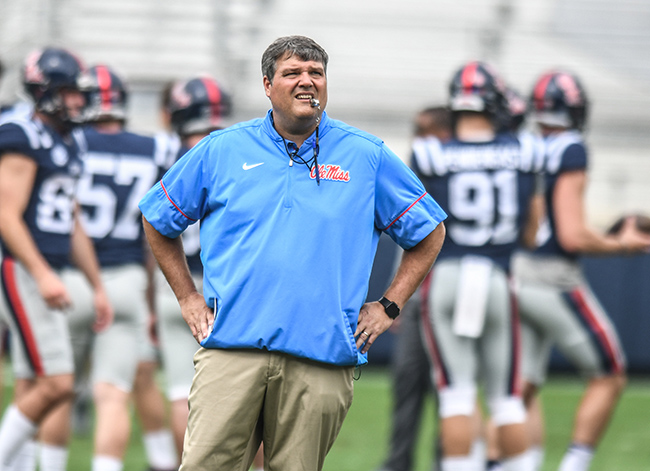 Media from across the Southeast will convene this week in Hoover, Ala. for an event that’s essentially become the start of the preseason of college football.

Each team in the SEC sends a four-man contingent, comprised of their head coach and three players of their choosing, to the Hyatt Regency hotel for a four-day event that began on Monday with Missouri, Florida and LSU. Ole Miss’s day to speak is Tuesday. Matt Luke will be joined by junior linebacker Mohamed Sanogo, senior offensive lineman Alex Givens and redshirt freshman quarterback Matt Corral. This event marks the team’s first time addressing the media since the spring.

Here’s a handful of story lines I expect Luke and Co. to focus on heavily in Hoover:

1. Finally having a team with depth

For the first time since the NCAA came down hard Ole Miss in 2017, Ole Miss is starting a season free of any sanctions. For Matt Luke, it’s his first time at head coach being able to field a full-scholarship team of 85 –  and the first time they’ll be eligible to return to the postseason.

The topic was a favorite of Luke’s, starting from the end of the 2018 season and going through recruiting, when Ole Miss signed the nation’s No. 22 class, one that included a whopping 31 players. Now, in the eyes of the national media for the first real time this calendar year, expect it to be something the head coach stresses.

2. How different things look with the new coordinator hires

However, what I don’t think was talked about enough this offseason is what this says about Matt Luke himself. Luke knew he had to shift things around – he knows he’s under pressure. However, what these moves really show is how secure he is about himself as a coach. Very few coaches in Luke’s position would have gone out and brought in two guys with a combined 34 years of head coaching experience to work under him.

But really, the SEC Media Day storyline will be how much different the Rebels will look in 2018 on both sides of the ball. Rodriguez brings a RPO and option-heavy, run-first approach to Ole Miss. It’s a stark difference from the free-flowing, yet rigid, pass-first system Longo had in place.

The changes defensively will be just as noticeable. Ole Miss is switching from a 4-3 defense under McGriff to a 3-4 defense under MacIntyre. This requires a handful of players to switch positions around the edges – something that takes time. We’ll know pretty soon the impact of these new hires, but it will probably be the most talked about aspect Tuesday when Ole Miss hits the national stage.

Matt Corral isn’t just the only freshman that will be talking to media this week – he’s the only underclassman, period. Every other school in the conference is sending solely juniors and seniors to media day. Ole Miss is sending a freshman.

For the flaws of the Phil Longo offense, there’s no debating the quarterback numbers that were put up that last two years. Jordan Ta’amu finished 2018 as No. 7 in the FBS in passing yards (3,918). The problem with the system was, he was the only quarterback in the top-20 in yards to throw under 24 touchdowns. He threw just 19.

Those red zone struggles are the reason for the system change. Now, it’ll be on Corral to be more efficient in the red area. The freshman showed glimpses in short work in 2018 (completed 72-percent of his throws), but it’s hard to even compare that to the new system. He was up and down in the spring game (completing 59 percent of his throws), and quite frankly will have to be better than that in the fall if Ole Miss is going to have success.

4. Where will Ole Miss and individual players be ranked by the media members?

The SEC will release the pre-season team ranks as well as the preseason All-SEC team on Friday of this week. The media in Hoover vote on the teams and players throughout the week and totals produce the ranks. Warning: don’t expect Ole Miss to be ranked too highly.

Vegas ranks the Rebels in a tie for last in the SEC with Vanderbilt (based on win total numbers). I don’t think Ole Miss will be picked last, but I think it’ll be closer to the bottom than most fans want to expect. A spoiler: I think I’m going to vote Ole Miss 12th of 14, ahead of Arkansas and Vanderbilt.

As far as individual players go, I think the best shot to be named preseason All-SEC actually goes to junior kicker Luke Logan. Logan made 22 of 27 field goals and 45 of 46 extra point attempts a year ago. Two members of the media day contingent, Mohamed Sanogo and Alex Givens, have outside shots at the team but I think are unlikely to make it. I’ll release my whole ballot later in the week when the rankings and All-SEC selections come out.

You can reach Nathanael Gabler at nathanael.gabler@oxfordeagle.com with news tips, suggestions or comments. Follow @ngabler4 on Twitter for updates throughout Media Day on Tuesday.