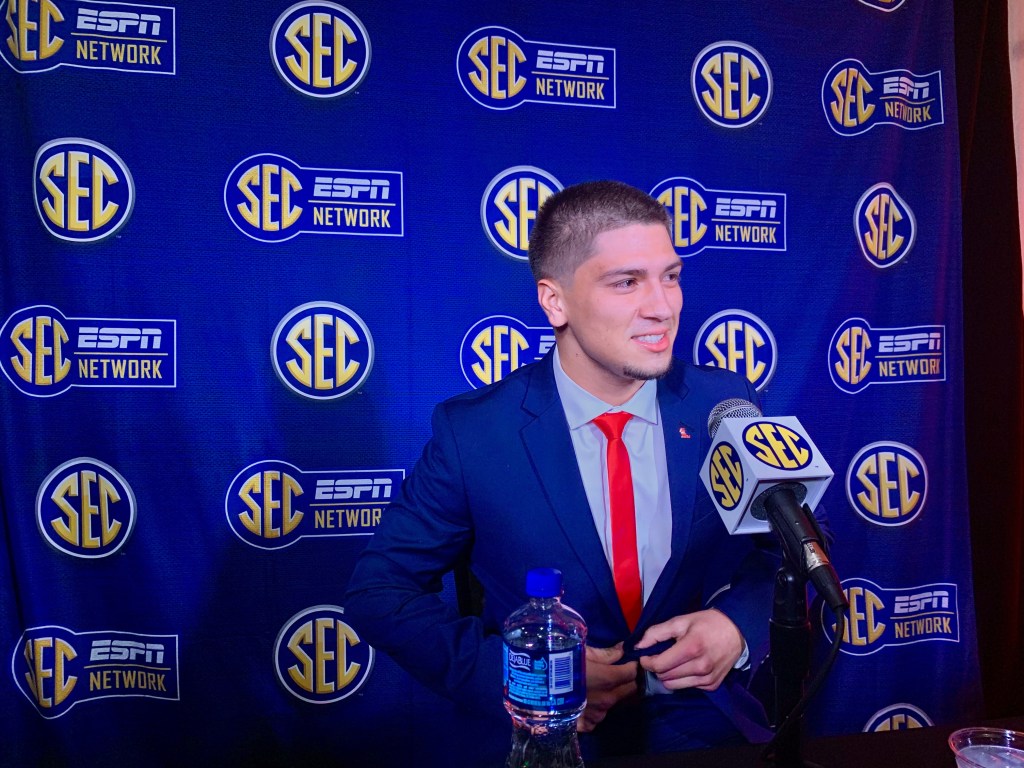 Ole Miss redshirt freshman quarterback Matt Corral was the only underclassman at SEC Media Days. The SEC announced on Wednesday the 2020 SEC Media Days will be held virtually due to COVID-19. (Photo by Nathanael Gabler / Oxford Eagle)

They never really had a quarterback controversy. From the minute the 2018 season ended, Matt Corral was the future of the quarterback position in Oxford.

When Ole Miss was settling on three players to bring to SEC Media Days this week, the fact that Corral was a freshman wasn’t much of a factor. He’s not just the only freshman at SEC Media Days, he’s the only underclassman, period. But Matt Luke doesn’t seem to care about that – Corral is a leader.

“He was forced into that leadership role and he did a great job with it. I think his competitive nature and his fire and the way people gravitate towards him made him an obvious choice to bring,” Luke said. “As a former player, you want to be around guys that have that energy and that fire and that toughness, especially at that position.

Ole Miss very well may have the youngest quarterback room in the entire nation. With Corral at starter, you have a guy who’s played in four games. Yet he’s never started and he’s attempted just 22 passes in his career. As for the other options, the Rebels have three other quarterbacks on scholarship and all three are true freshmen.

Really the only difference separating Corral and the three true freshmen – Grant Tisdale, Kinkead Dent and John Rhys Plumlee – is four games. A year in the Ole Miss system surely helps to a degree, but it’s a completely different system now than it was a year prior. What made Corral the clear choice to start for Ole Miss is, game experience at the college level in the SEC that the others can’t have until they’ve been there.

“Of course the younger guys look to me, the guy that just got here,” Corral said. “But we’re all in this thing together. We’re a unit and we’re only as strong as our weakest link. Right now we’re all on the same page. If I were to get hurt right now, I’d have a good amount of confidence any of those kids filling in. They’re right there, it’s just them having the confidence to go out there and do it.”

Luke and Co. have full faith in Matt Corral. There’s no wavering, no uncertainty and no question marks – Matt Corral is the guy. The decision to bring him to media day as a freshman shows how much confidence the staff has in him, both as a player and a person.

But it’s not just the staff. He may be just 20 years old and a freshman, but he’s earned the respect of seniors.

“I’m really excited about Matt. He’s stepped up as a leader this spring,” senior offensive lineman Alex Givens said. “As you’ve seen, he’s a really feisty player, which you love to see as an offensive lineman. He fits in with Rich Rod’s offense. Very athletic. He can run and make good decisions and he can throw the ball. We’re super excited to have him in the huddle and be a voice for us and a leader at such a young age.”

The Ole Miss staff believes Corral can make every throw needed in the Rich Rodriguez-led offense. Corral himself likened it a lot to the offense he played in during high school. If that’s at all true, it’s really good news for Ole Miss. Corral averaged about 2,750 passing yards, 240 rushing yards and 31 touchdowns per year over his final two high school seasons.

He may not be the most athletic runner on the team, but he’s more than fast enough to handle what Rodriguez wants him to do. That said, he sure learned quickly that he might not be able to simply run around some guys like he did not long ago when he was playing high school football.

“It’s not necessarily faster, but you just have to think faster,” Corral said. “The SEC West is the closest step to the NFL. Alabama’s linemen, Georgia’s linemen, South Carolina’s linemen, those guys run just as fast as me and they’re twice as big as me. It’s knowing your playbook and knowing your reads and knowing what to do with the ball when they give you something you don’t expect.”

In his four games last year, Corral’s numbers were good. He completed 16 of 22 passes for 239 yards and ran for 83 more yards. He scored four touchdowns and was intercepted just once. Matt Corral got SEC experience. He played much of the home loss to Mississippi State to end the year, and he played in blowouts such as the 70-21 drubbing of ULM.

Now, Corral ushers in a new era of Ole Miss football. There’s new coordinators on both sides of the ball. Ole Miss no longer faces any scholarship reductions or postseason bans. A lot will be expected of Corral. Fair or not, a lot of the successes or failures of the 2019 Ole Miss team will fall on the shoulders of the young freshman.