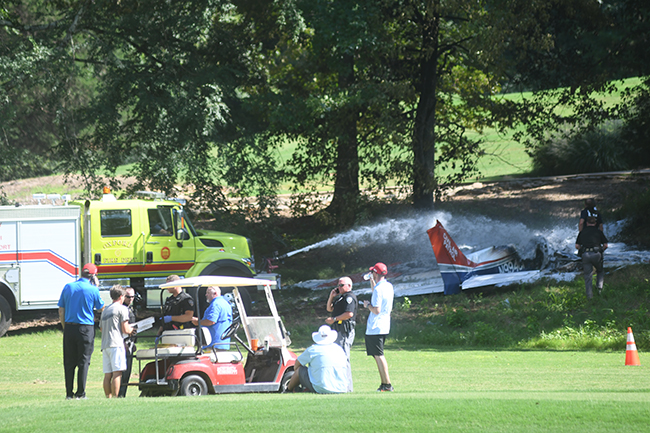 The National Transportation Safety Board released their preliminary report regarding the July 6 plane crash at the Ole Miss Golf Course that claimed the life of a Starkville teen on Wednesday.

At approximately 3:15 p.m. CT Lake Little, 18, crashed her Cessna 172R airplane next to the 17th tee box. She was working on touch and go takeoffs at the University-Oxford Airport (UOX) after leaving from the Golden Triangle Regional Airport in Columbus around 2 p.m. Little sustained serious injuries which she later succumbed to at Regional One Medical Center in Memphis.

Little held a Federal Aviation Administration (FAA) student pilot certificate that was issued to her on Aug. 19, 2017. On October 5, 2018 she was issued a FAA third-class medical certificate with no limitations. On the application for the medical certificate, Little reported having accumulated over 20 hours of total flight time, with 13 hours logged in the previous six months to applying. Little’s logbook was not recovered at the crash site.

The Civil Air Patrol informed NTSB investigators Little had accumulated about 69.4 hours of total flight time with 30.2 hours in 172R airplanes. 32.7 of those hours were logged in the last 90 days, 16.7 hours in the last 30 days and 90 minutes of flight time in the 24 hours prior to the crash.

In the report, NTSB investigator in charge Ed Malinowski claimed an operator at UOX reported he heard Little on the common traffic advisory frequency (CTAF) notifying the local air traffic she was in the area. The operator did not see the airplane and around 3:15 p.m. CT heard Little announce on the CTAF she was going to land the single-engine plane on runway 9 with a tailwind.

“The pilot’s voice sounded ‘panicked’ and she did not finish her sentences,” the report read.

A helicopter was in the area asking for Little’s location but she did not respond. A witness indicated there were no engine anomalies heard. The airplane headed toward the golf course where the witness stated they saw the airplane “go straight down behind the trees.” Smoke was then observed about three minutes later behind the tree line, separating the airport and the golf course.

A witness at the golf course reported that he first heard the airplane on takeoff or very close to the runway. The first visual the witness had of the plane was above the trees over the 16th hole. The witness claimed in his statement that Little’s plane looked to be “struggling” to maintain airspeed, was nose up and appeared to be very close to stalling. The witness said the plane then made a left turn and lost altitude and then thought it was attempting to land on the 17th fairway, but kept turning left into the nearby trees. The report noted there was a fire on the ground but not an explosion.

The plane came to rest about 1,200 feet north of runway 9’s centerline. A ground scar consistent with a left main landing gear impression was seen about 70 feet north of the wreckage. The fuselage’s center section was found to be melted, deformed and discolored by the fire.

Investigators removed the No. 4 cylinder and discovered material under its exhaust valve. Oil was observed within the engine crankcase when the cylinder was removed. The oil screen and oil filter were examined and did not contain debris. The cylinder is being sent to the NTSB Materials Laboratory for further testing.

Lafayette County Coroner Rocky Kennedy has been asked by the NTSB to arrange an autopsy and to take toxicology samples.