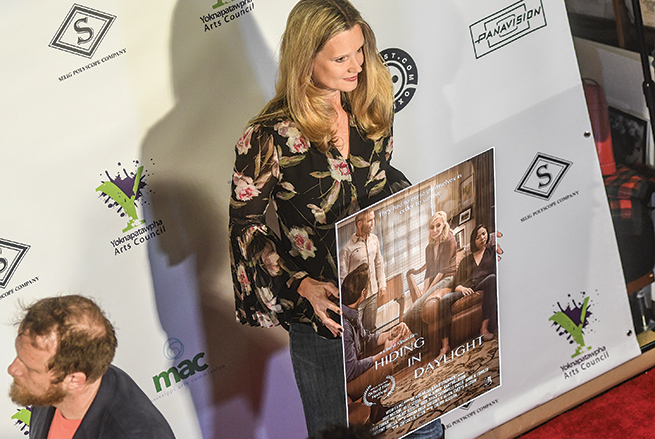 Cheryl Allison, producer of the film “Hding in Daylight”, walks the red carpet at the Oxford Film Festival at the Ford Center in Oxford, Miss. on Thursday, February 7, 2019. (Bruce Newman, Oxford Eagle)

The Mississippi Arts Commission awarded its yearly grants last week, and the Oxford Film Festival was among the list of recipients.

The annual festival was awarded a $20,100 operating grant and a $1,000 mini grant, which will be used to attend the Film Fest Alliance regional conference in Birmingham, Ala.

The money is a portion of the nearly $1.4 million in grants the MAC awarded in the 2020 fiscal year that are used to support year-round festival activities. The grants are possible thanks to the continued funding by the Mississippi State Legislature and the National Endowment for the Arts.

“The Mississippi Arts Commission is proud to support arts organizations as well as arts activities and festivals around the state through grant-making,” Malcolm White, executive director of MAC, said. “These funds help broaden the reach of arts by educating our communities about Mississippi’s enduring creative legacy and offering arts experiences and performances to people in nearly every area of the state.”

The Oxford Film Festival, which was founded in 2003, will receive half of the grant at the beginning of the year and the other half at the end of the year. The festival is a nonprofit organization that brings in films and filmmakers from around the region and country, including some international films. Next year will be the 17th-annual edition of the five-day festival that screens feature length and short films in a variety of genres.

As part of its fundraising efforts, OFF schedules year-round programming to help make Oxford and North Mississippi a center of filmmaking. Throughout the year, the festival schedules different workshops, movie screenings and educational programs aimed at all demographics.

“We could not have expanded to year round events without the support of MAC,” Melanie Addington, executive director of the Oxford Film Festival, said. “Their support for our operations is instrumental.”

Next year’s festival is moving from its traditional week in February to a month later in March (18-22). Early bird passes are now available for $125, $50 off their regular price, and single tickets for movies will be available in January 2020. The festival is currently accepting film submissions and sponsorships. More information can be found at http://oxfordfilmfest.com.