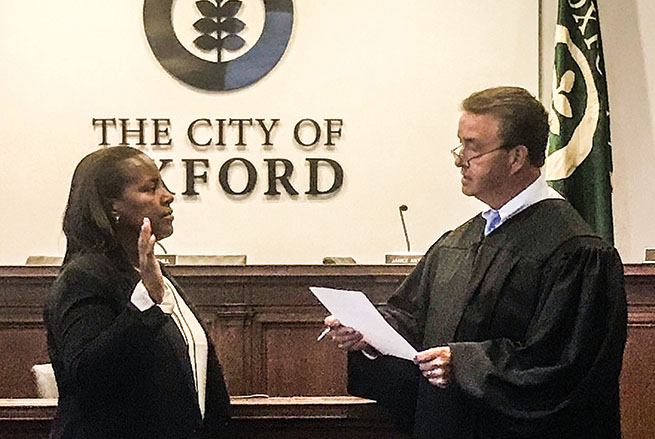 Prior to Tuesday’s meeting Oxford’s Board of Aldermen became whole again.

Kesha Howell-Atkinson was sworn in as the newest alderman of Ward IV, officially taking over the seat her father, Ulysses ‘Coach’ Howell, sat in for 26 years.

“(Howell-Atkinson) will be a voting member of this Board of Aldermen in about five minutes and she will be here for her first meeting tonight,” Mayor Robyn Tannehill said prior to the swearing in ceremony. “We are so thrilled.”

A special election was held on July 2 due to the sudden passing of Howell on May 11 after suffering a massive stroke. Howell-Atkinson defeated Arnold Pegues by a vote of 97-21, after absentee ballots were counted. The Board approved the election results and official recapitulation during Tuesday’s meeting.

“I intend to work tirelessly to live up to Ward IV expectations,” Howell-Atkinson told the EAGLE after being elected. “I want to be a part of ensuring that Oxford continues to thrive and that our community continues to move forward.”

The current Board is in the middle of their terms, and Howell-Atkinson will serve out the final two years of her father’s term. The Board’s seats will be up for election in 2021.