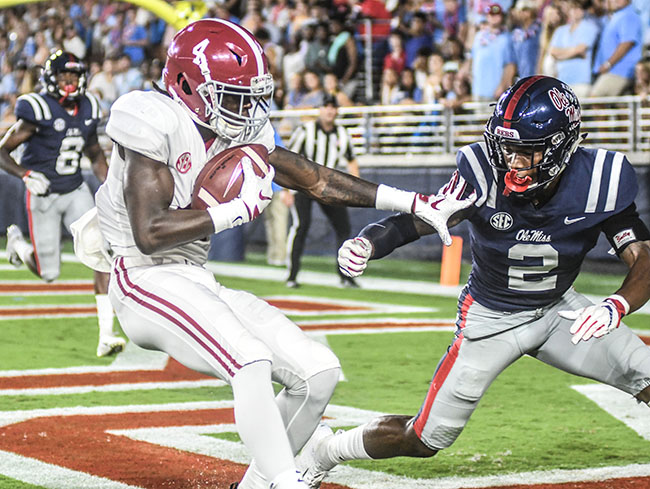 The Southeastern Conference released their Preseason All-SEC Team and projected SEC standings on Friday morning, as voted by the media this week during SEC Media Days.

Ole Miss was selected to finish 12th of 14 in the SEC, 6th of 7 in the West. No Rebels were selected to any of the three Preseason All-SEC Teams.

Media members at SEC Media Days are given the option to vote on the preseason teams and projected standings. For most positions, votes are cast for much more than a starting team (eight defensive linemen, 10 offensive linemen, etc.) and a points system determines the final team.

Below was my ballot, explained. There’s not really a need to go into the top-10 linemen or so, so I just went through what would have been my actual first-team ballot.

If Tagovailoa stays healthy, Alabama is going to be nearly impossible to beat. He’s the likely No. 1  pick in the 2020 NFL Draft and the Heisman favorite. He’s the most electric quarterback prospect to watch since Johnny Manziel, but he’s a much better pro prospect. Tagovailoa’s only knock is his health. He suffered a pretty bad high ankle sprain in the SEC Championship game that required a minor corrective surgery and left him less than 100 percent for the national championship last year. He was also banged up all season. But if the kid can stay on his feet, he’s appointment television all year.

Ke’Shawn Vaughn is the SEC’s leading returning rusher. The kid averaged a preposterous 7.9 yards per carry a year ago, the most in the SEC by 1.2. There’s really very little reason to vote him No. 2 behind Swift, except that Swift also ran for 1,000 yards last year and no longer has to split time with Elijah Holyfield this year. Swift should fall into the long line of NFL-caliber Georgia running backs drafted in the early rounds. For the record, I voted Scottie Phillips 4th here, behind Swift, Vaughn and Alabama’s Najee Harris.

It’s really not fair that Alabama has both the best quarterback and the best receiving core in the country. It’s truly ludicrous. As a sophomore in 2018, Jeudy finished second in the SEC in receiving, behind A.J. Brown. Sorry to break it to Ole Miss fans, but Jeudy was better. Brown may have led the SEC in receiving, by Jeudy had just five less yards and 8 more touchdowns. Lipscomb is the second Vandy player on my ballot and on the team. Spoiler: there will be three. Vanderbilt may not be very good this year, but they have a really impressive trio of skill guys. Lipscomb finished third in the SEC in receiving and led the conference in receptions last year. For Waddle, Alabama legitimately has four guys that you could vote for. Jeudy is the top guy and the likely top-10 draft pick, but Waddle, Henry Ruggs III and DeVonta Smith are all legitimate choices.

The SEC has some really good tight ends this year. Pinkney finished 11th in the conference, independent of position, one year ago with 774 receiving yards. Okwuegbunam is a legitimate first round talent at the tight end position.

If quarterbacks weren’t all but a lock to go No. 1 in the draft nowadays, Thomas would have a legitimate shot. Having Andrew Thomas on Jake Fromm’s blind side is a huge advantage for a Georgia team trying to get over the hump. The second tackle spot was a lot tougher to pick. I went with Prince Tega Wanogho over Tennessee’s Tre Smith – Ole Miss’ Alex Givens got a vote as my 4th tackle. The inside of the line is just a trio of posters in the run game. Williams moves from guard to center this year, but Stenberg and Lewis are natural, mauling guards.

I’m not sure how any other team in the nation has a better defensive line than Auburn. If they’re going to contend in the SEC West, that line will be the reason. Derrick Brown is a likely top-10 pick in the NFL Draft. Marlon Davidson is an athletic freak and Nick Coe’s seven sacks from a year ago make him second among returning players. The other d-line slot goes to the other Alabama school – Davis is likely another in a long line of Alabama defensive linemen taken in the first round of the 2020 draft. I had Ole Miss’s Benito Jones as defensive lineman No. 6 on the ballot.

Simply put, Dylan Moses is the man on the Alabama defense for 2019. Alabama has essentially been a linebacker factory and Moses is the next output. He had 86 tackles and 10 for a loss a year ago as a sophomore. Jennings is different linebacker than Moses – he only had  50 tackles last year, but recorded 6 sacks. A weird thing about Jennings: he finished 2018 with 11 passes defended. The next-best linebacker had 6.

Sanogo I struggled with. I ended up voting Sanogo third, Arkansas’ De’Jon Harris fourth, and Mississippi State’s Willie Gay, Jr. fifth. Any of the three could’ve been on the starting team. I like Sanogo’s sideline-to-sideline athleticism and I love his 112 tackles a year ago. Side note, Sanogo may not have deserved to be a first-team linebacker, but the fact that he didn’t get on any of the three teams is simply ludicrous.

With all due respect to Tua, Grant Depit is my favorite player in the SEC this year. He’s so fun to watch and he’s equally just good at football. A safety, he recorded 46 tackles, 5 sacks, 9 passes defended, 5 interceptions and one forced fumble as a sophomore a year ago. He should be a top-5 pick in the draft a year from now. Diggs, Henderson and McKinney are also potential first-rounders.