Committee to examine the issue of excess Square signage 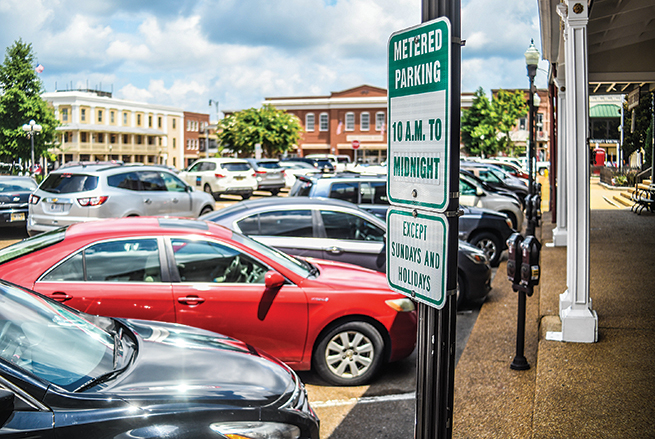 The Oxford Board of Aldermen on Tuesday agreed to form a committee to look into sign usage on the Square, in Oxford, Miss. on Thursday, July 18, 2019. (Bruce Newman, Oxford Eagle)

The issue of too many signs on the Downtown Square picked up some more momentum this week when Oxford’s Board of Aldermen agreed to form a committee to look into the problem at the request of the Planning Commission.

During the Oxford Planning Commission’s July 8 meeting, a request to have the excess signage on the Downtown Square examined by a committee was made. Chairman Brian Hyneman spoke at the end of the commission’s meeting about several “redundancies” involving the placement of signs.

“I think the Historic Urban Center, which is the Square, has a lot of redundant signage that can be moved and can be lessened,” Hyneman said during the July 8 meeting.

Mayor Robyn Tannehill and the Board of Aldermen supported forming a committee when the request was presented to them during Tuesday’s meeting. Aldermen Mark Huelse and Janice Antonow voiced their support, and acknowledged there was problem with clumps of signs in close proximity to one another.

The Board approved forming a committee after Ben Requet, Oxford’s Director of Planning, brought forth the commission’s request and suggestion of having several representatives from governing bodies and groups on the committee. The Planning Commission, Courthouse Square Preservation Commission and Visit Oxford were entities suggested to have a voice on the committee.

Antonow was appointed to be the Board’s representative after volunteering to serve on the committee.

“I think it’s a great a great idea,” Antonow said. “What happens in situations like that is just like what happens in your house. You start with stuff here and there and you don’t realize how much clutter you’re getting. But somebody else coming into your house looks around and says, ‘Oh my gosh, it’s a mess.’”

Requet noted he had been working with Mark Levy to take inventory of signs throughout the Historic Urban Center. The only signs that will be examined by the committee are municipal signs and not commercial or private signs located on the Square. A timetable to form a committee was not established at Tuesday’s meeting.