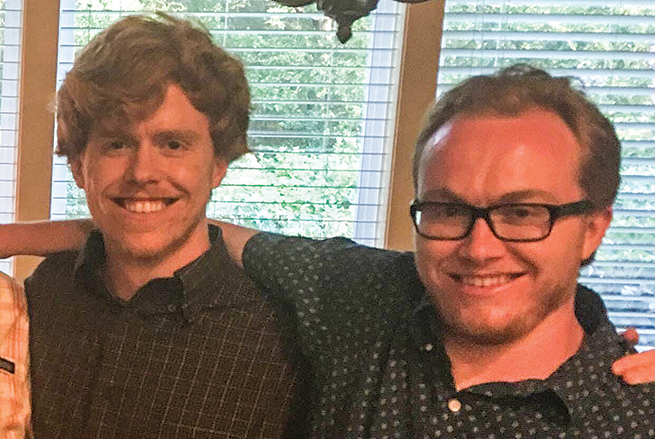 Lee Ingram, left, is hosting the event in honor of his brother, Ben, on Saturday.

Lee’s twin brother, Ben Ingram, took his own life after a long battle with mental illness. In the two years since, the Ingram family has made sure the memory of their beloved son and brother will go on.

On Saturday , “The Walk for Ben” will take place in Oxford and Ridgeland, Miss., as a tribute to an activity that Lee’s brother grew to love doing with his dog, Charlotte.

“(Ben) really struggled, kind of starting in high school, and a lot of people wouldn’t know it,” Lee said of his brother. “He was a funny dude, way funnier than I am, and really fun to be around. But his good friends and his family definitely knew that he struggled with anxiety.”

Ben suffered panic attacks and battled depression, which “spiraled out of control,” Lee said. When searching for answers, Ben turned to a counselor at his church, who became a sort of life coach, and who recommended he take daily walks. Ben got Charlotte from a rescue, and the two commenced on walking every day until he got up to five miles.

Each year, Lee said he wants to come up with something different that honors his brother’s life, and this year’s idea came to him instantly. The event will take place at the Whirlpool Trails in Oxford and the Natchez Trace in Ridgeland from 6 to 7 p.m. this Saturday. It is free and open to the public, and Lee said he is encouraging people to come out and enjoy a walk with friends, family or even their pet.

“It’s really just meant to be pretty informal,” Ingram said. “Come and walk and just enjoy a pretty trail. It’s not meant to be a sad event. We’re trying to just bring people together, bringing awareness for mental health and the need for finding a refuge, whether that’d be walking on a trail (or something else).”

The Wellness Center of Oxford is informally partnering with the Ingrams for the event.

To commemorate the one-year anniversary of his brother’s passing, Lee turned a collection of Ben’s writings into a book titled “Dreams About Food.” The book is available for purchase on Amazon, and Lee said he plans to be at the Mississippi Book Festival next month with copies available for purchase. He has already sold around 500 copies of the book, with all the proceeds funding the Benson Reading Room Scholarship, which is awarded to juniors entering the Honors College at Ole Miss.

“I’m trying to find something new every year, or something every year that resonates with Ben’s story,” Lee said. “This is part of a tradition that I hope can keep going. Every year around the time of is passing, we want to try and do something good.”

Committee to examine the issue of excess Square signage