The farce of All-SEC voting and pro-Alabama bias 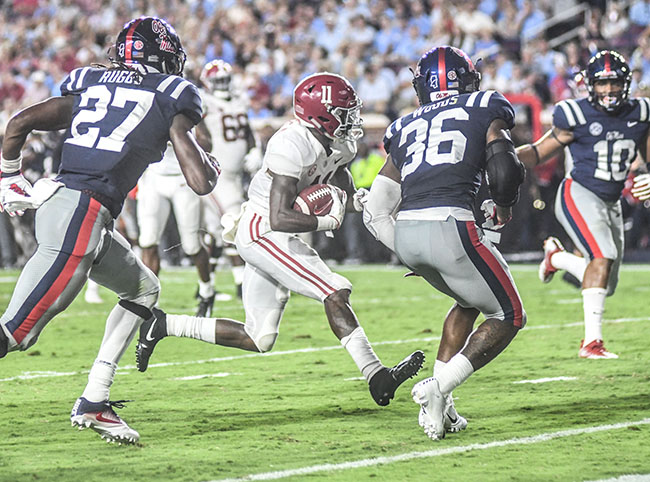 But for some reason, the All-SEC Preseason teams bothered me.

As a journalist, I’m not supposed to really care about Ole Miss or hate LSU or Mississippi State or whatever. But there becomes a line in which attempting to remain unbiased crosses into a false sense of reality.

I was kind of perturbed Friday when the SEC released its Preseason All-SEC Teams. Two things bothered me: Ole Miss had no players represented, making them the only school in the conference without a represented player, and the number of Alabama players represented.

Now the first one represents, potentially, some sort of bias I have by covering Ole Miss. But it’s also maybe just a reality.

There are 78 All-SEC slots between the three teams. Ole Miss probably didn’t deserve a first-teamer. But there are four Rebels who, objectively, should have been on one of the All-SEC teams. MoMo Sanogo, Scottie Phillips, Alex Givens and Luke Logan should feel slighted.

MoMo Sanogo recorded 112 tackles last year from the linebacker position. Not one player on the preseason ALL-SEC first team recorded more than 86 last year. Tackles obviously aren’t an all-inclusive linebacking stat, but they’re important. Sanogo may not have deserved first team recognition, but he should’ve been on that list.

Scottie Phillips had just seven rushing attempts over the final two games of the 2018 season dealing with an ankle injury. He still finished ninth in the SEC in rushing and tied for fifth in rush touchdowns. Of the eight players with more rushing yards in 2018, one was a quarterback (who graduated) and four other running backs graduated. So, among returning running backs, Phillips ranks fourth in rushing a year ago, all while all-but-missing the final two games of the season. How can anyone realistically think there are six running backs in the SEC more deserving of All-Conference recognition?

Offensive linemen are tougher to quantify, but thinking there are 15 in the conference better than what will be a four-year starter all across the offensive line, in Alex Givens, is just tough for me.

The last Ole Miss snub – and arguably the most egregious one – comes at kicker. There’s ambiguity in football evaluation, no doubt. That’s why I can have different opinions than all other people about a player and neither of us are necessarily wrong. There’s no ambiguity at kicker. In a way, it’s like a sprinter. The numbers are the numbers, and that’s it. Ole Miss kicker Luke Logan is, undeniably, deserving of an All-SEC selection. As a sophomore in 2018, Logan hit 22 of 27 (81 percent) field goals and 45 of 46 extra points. The All-SEC second team kicker, Anders Carlson, hit just 15 of 25 field goals a year ago (60 percent).

Everyone with a vote has the right to vote for whoever they want, selected from a shortlist of players per position. No one that made the team is a bad football player or truly underserving. It’s just a bit ridiculous when solid football players from a program like Alabama make a team over better players from a lower-ranking team.

Alabama had 10 of the starting 22 players on the All-SEC First Team – that number is 12 if you include a return specialist and all-purpose player. Now, Alabama is really, really good at football and should be the favorite for the National Championship. I even voted them 7 of the starting 22. But getting 10 (or 12, depending how you look at it), is wild and a bit absurd.

With all due respect to Henry Ruggs III, Alabama’s second receiver on the All-SEC first team, he’s nothing close to where Kalija Lipscomb is, a Vanderbilt receiver on the second team. A year ago, Ruggs had 46 catches and 741 receiving yards. He’s a really good football player. But Lipscomb had 87 catches and 916 yards, playing on a worse team with a much worse quarterback. That’s the kind of voting that happened all over the place – Lipscomb is clearly more deserving of being on the first team, but the nod goes to the Alabama player.

If you’re not going to put the time in to do the research and actually vote for the best players, that’s fine – just don’t vote. That’s why I published my ballot on Friday – people should be held responsible for their picks, preventing a random media member for just cheerleading for their alma mater or the team they cover. I can tell you that there were exactly one media member who voted for each of the following teams to WIN the SEC: Tennessee, Florida, South Carolina, Mississippi State and Auburn.

If you really want to get creative, sure. Maybe there’s a wild scenario in which Florida or Auburn pulls out a miracle SEC Championship run this year. For the record, Florida is 12-to-1 and Auburn is 25-to-1 to win the SEC title in Vegas sportsbooks. But seriously, who voted for South Carolina or Tennessee? My guess: someone in Columbia or Knoxville. It’s egregious. Those people should be held responsible for their votes.

The moral of the story is that, these votes don’t matter. Ole Miss players who were snubbed, congrats – here’s some locker room material. No one believes in you. Use it. But for those media members voting on name and school recognition, maybe do a little more research next time. Or just don’t vote South Carolina to win the SEC.