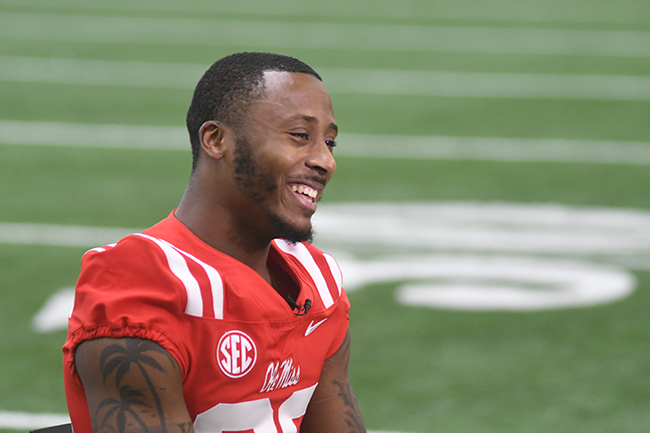 Mississippi defensive back Zedrick Woods is interviewed during the team's media day at the Manning Center in Oxford, Miss. on Thursday, August 2, 2018. (Bruce Newman, Oxford Eagle via AP)

One of just three Rebels to start on defense during every game in 2018, Woods was signed as an undrafted free agent by the Jacksonville Jaguars following April’s NFL Draft. As first reported by Jaguars beat writer Phillip Heilman, Woods submitted his retirement papers on the same day the Jaguars rookies reported to training camp.

Roster is now at 89 players.

Woods was reportedly dealing with a turf toe injury sustained post-combine. A player who relies so much on speed and athleticism, the seemingly simple injury was preventing him from feeling like himself.

“It was weighing on him and he made a decision to ultimately step down… It was kind of shocking to me, just because I knew how much he was grateful for the opportunity to get a chance to play in Jacksonville and not being too far from home,” Woods’ agent Ron Butler told The Athletic. “I think they expected a lot from him this year.”

Despite being undrafted, many around the team thought Woods’ athleticism gave him a great chance to make the roster as a special teamer.  Woods put himself firmly on the NFL radar after running the fastest 40-yard dash (4.29-seconds) at the NFL Scouting Combine back in March.

Prior to his retirement announcement, Woods attended all nine of the team’s organized team activities and June’s mandatory three-day mini-camp.

During his time as a Rebel, Woods started 37 games and made an appearance in 12 more. He recorded six interceptions and 133 tackles.

The first day of Jaguars training camp is slated for Thursday. Rookies had to report Monday with veterans showing up Wednesday. Zedrick Woods won’t be in attendance – he’ll be on the team’s reserve/retirement list.