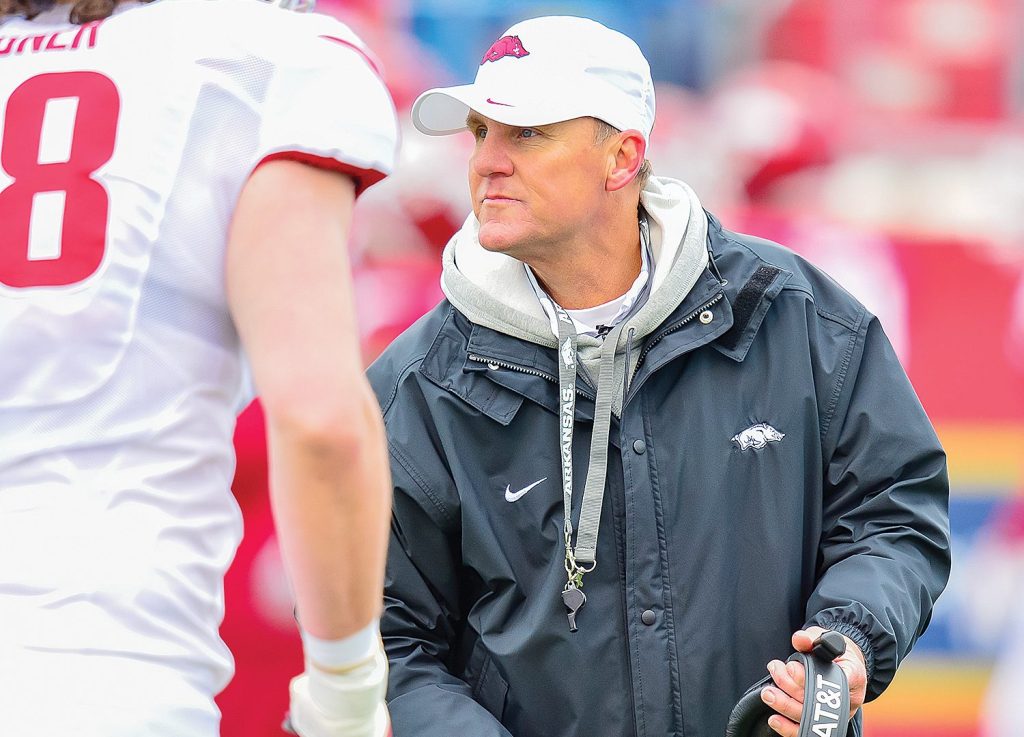 Editor’s note: Arkansas takes us to part two of a 16 part series, examining every team in the SEC, plus three bonus’ with the three FBS Ole Miss non-conference games. We’ll preview one school a day, alphabetically, until all 16 are completed. Yesterday, we previewed Alabama. Today, the Arkansas Razorbacks. For each of the schools in the series, see the bottom of the article.

Simply put, Arkansas was the worst team in the Southeastern Conference a year ago.

In Chad Morris’s first year as head coach, the Razorbacks actually took a step back from the year prior, a 4-8 season that marked the end of the Brett Bielema Era. It’s going to take time to turn the Razorbacks around, but it’s hard to imagine Morris’s second year will be worse than his first.

Morris was open and honest about the struggles his team had a year ago while speaking to media in Hoover, Ala. last week. But he seemed optimistic about his second year in Fayetteville.

If Arkansas will be good offensively, it will revolve around the running game. There are very few positions where the Razorbacks return a bunch of experience. Tailback Devwah Whaley should control a good portion of the Arkansas offense that wants to get out and play super fast. Rakeem Boyd, another running back, was talked up a good bit by Morris at media days. That’s where this team starts and ends.

At quarterback, Arkansas has a legitimately wide-open competition. Ben Hicks, a senior with three years of playing time under his belt, and Nick Starkel, a grad transfer from Texas A&M, will be fighting for the job. It’s an interesting battle. Hicks has played in Fayetteville for three years. It’s rare to see a guy like that not start his senior season. On the other hand, grad transfers usually go somewhere they’ll play right away. It’ll be one of the more interesting quarterback battles in the SEC.

Defensively, Arkansas is built on speed with an emphasis on stopping the run. That’s something that will be very interesting with the Razorbacks come to Oxford early in the year. Ole Miss wants to run the ball a lot. Arkansas’ main defensive goal is to stop just that.

Returning on that defense is two of the best in the conference at what they do. De’Jon Harris is a legitimate NFL prospect at linebacker. In his last two years in Fayetteville, Harris’s worse numerical year saw him record 115 tackles. Last year, he had 118 tackles, two sacks and five batted passes. He’s a fantastic run defender.

On the defensive line, it starts with McTelvin Agim. Now a senior, Agim has started all but one game since his sophomore year, playing in all 13 as a freshman. He’s experienced, with the numbers to back it up, with 10 tackles for loss a year ago.

Arkansas isn’t going to win the SEC. That’s just a fact. They were voted to finish last in the conference. At the same time, it’s an experienced team with a second-year coach that should be better than they were a year prior. Ole Miss has a good chance of beating the Razorbacks in their game in Oxford, but it will probably be a lot closer than a lot of Rebel fans want to believe.