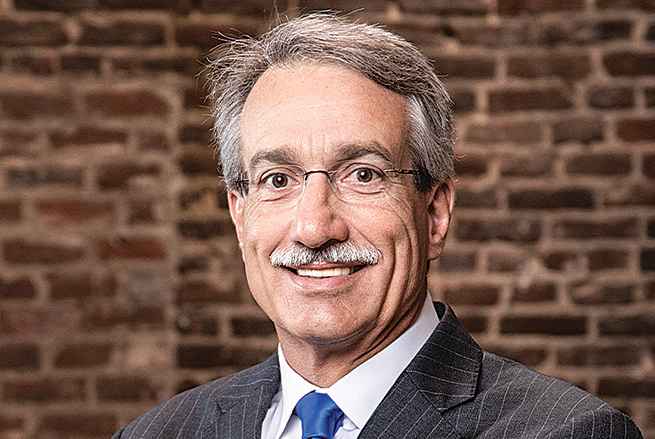 The search committee for the University of Mississippi’s next chancellor is in the midst of creating their shortlist of candidates.

While the process has been kept close to the vest by those in charge, one name did manage to emerge earlier this week and admitted interest in the position.

While speaking with reporters at an event in Jackson on Monday, Gerard Gibert did acknowledge his interest when asked. Gibert spoke with the Eagle on Tuesday and said he was approached by what he would call “stakeholders in the Ole Miss community” about the position around February, and stated he did not initiate the conversation. He confirmed he had taken the appropriate preliminary actions in the application process and is awaiting the next step.

“I thought about that and came back and said, ‘You know, I might,’” Gibert said. “At first I guess, I sort of a was little taken back and I wasn’t sure. Then after giving it some careful consideration with my wife, I decided that maybe this was the plan for me.”

Gibert is one of the first to publicly discuss his interest in the Ole Miss position since the Institute of Higher Learning announced in June it created a 39-member advisory committee for the search for a new chancellor. This search comes after Jeffrey Vitter stepped down as chancellor in January following a three-year stint in the position.

An alumnus of Ole Miss, Gibert earned his bachelor’s degree in accounting and attended the university from 1976-80. Six years later, he founded Venture Technologies in Ridgeland, Miss., which he sold in January for $92 million. Governor Phil Bryant nominated Gibert to the five-member lottery board and Gibert was confirmed as the vice chairman of the Mississippi Lottery Corporation by the state senate earlier this year. He also serves on several boards for nonprofit organizations.

“I see this as a position that requires an extensive skill set,” Gibert said. “I think that’s true of any chief executive role, regardless of the organization; it requires a well-rounded skill set, I think, to be a good leader and effective as a leader. As a chief executive of a large company based out of Mississippi and a life-long Mississippian, I feel like I have developed a very robust and very diverse portfolio of skills during that period.”

Whoever the next person tabbed as Ole Miss’ chancellor will be, one of their biggest issues that will need to be addressed immediately is the declining enrollment numbers of the past couple years. 23,780 students were enrolled in the fall of 2017, compared to the 23,258 enrolled last fall. That was a decrease of 2.2 percent, and the enrollment number dropped 1.9 percent from 2016 to 2017, which was the first decline in enrollment numbers in 20 years.

“I can interact with people across a broad spectrum,” Gibert said. “I’m around kids and I hear them talk about the universities. …We’re in desperate need of a brand and an identity and something to rally around to feel good about. So, we need someone who can project that image and persuade people to feel good whether they’re high school kids, alumni or faculty. Somebody’s got to rally (them).”

The search process will take its next step later this year when a listening session is held on the Ole Miss campus on Sept. 5. Students, faculty and staff will get their opportunity to voice their concerns and opinions of what attributes they would like to see in the university’s next chancellor. Interviews for a shortlist of candidates is expected to take place in October.