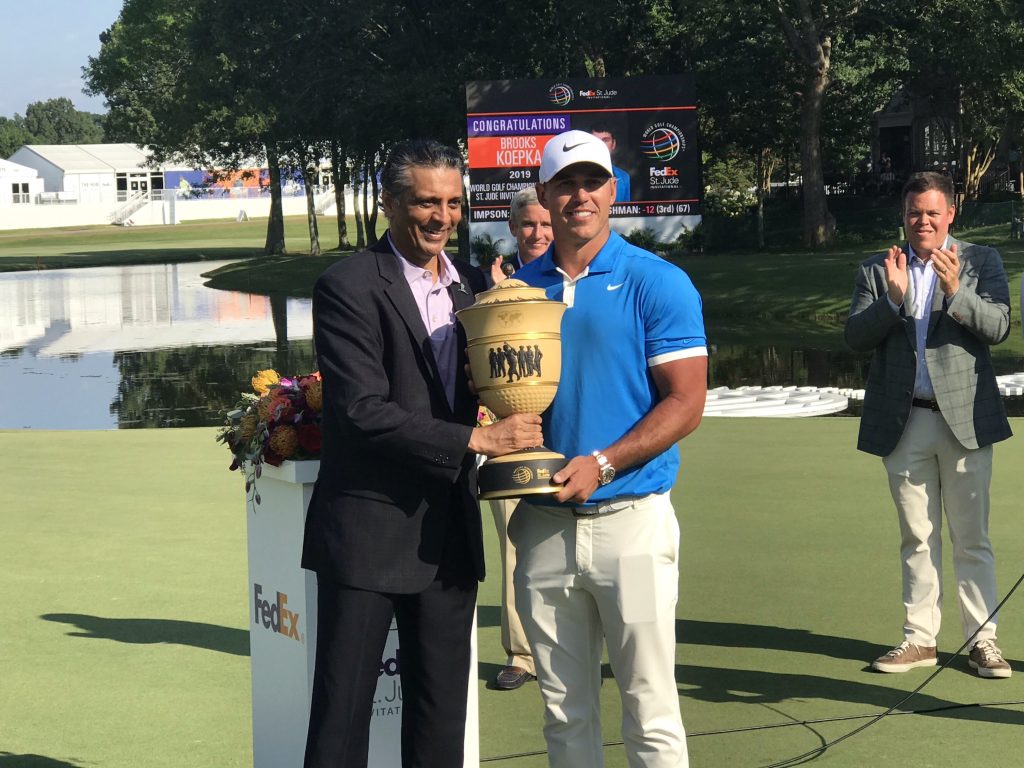 MEMPHIS, Tenn. – Brooks Koepka needed just a four-putt to win as he walked down the 18th fairway. In a sense, experience pays off.

Brooks Koepka posted back-to-back rounds of 64 and 65 to close the first World Golf Championships played in Memphis on Sunday. Koepka shot 16-under on the tournament, 5-under in the final round to give him a three-stroke stroke win over Webb Simpson (13-under).

Rory McIlroy (-12) opened day four with a one stroke lead over world No. 1 Brooks Koepka (-11). Both McIlroy and Koepka surged on Saturday, positing absurd eight-under and six-under scores, respectively. Koepka, the TPC Southwind veteran, had played here six times in the past, including each of the last two years. McIlroy had never stepped foot in Memphis before this week.

“This is the golf course that I feel like I know the best of any course on Tour. I think it’s a thinker’s golf course,” Koepka said. “Over those five or six years I’ve hit some wayward shots, so I kind of know where to miss it for each hole.”

Playing together on the final day, both players put up pars through two holes before what became a turning point at the third. Both players sat with very makeable birdie putts on the par-five fifth. Koepka sunk his to move into a tie for the lead, when McIlroy pushed wide left and had to settle for par. That birdie putt at three would kick Koepka into the unstoppable force mode that he’s been so prone to hit over the last two years. He would birdie three of four holes, moving to a two-stroke lead after six that he would never relinquish.

McIlroy, entering the day with a lead after shooting eight-under just one day prior, couldn’t keep pace. McIlroy, playing for the first time in Memphis, recorded just a single birdie on the final day, shooting a closing round 71 to finish tied for fourth. Mark Leishman posted the low round on Sunday, a closing 64 to push him into second place, but the day was really all about Koepka.

“Rory didn’t play the way he wanted to today, but still it’s so much fun to watch him play,” Koepka said. “You kind of get glued watching him hit balls. I mean, it’s mesmerizing watching him hit. You know, it’s always nice to squeak out a victory over probably the best player right now.”

Koepka, the best player in the world, simply showed why he’s the most dominant in the sport over the final three days in Memphis. The 29-year-old shot a solid opening round 68, but he left the day just tied for 18th. Every day he claimed the leaderboard, moving into a tie for 7th after Friday and all the way up to second place to start Sunday.

When it mattered most, no one was as consistent. Not one bogey was recorded on his scorecard on Sunday, just a steady round of golf that saw him take the lead at the fifth hole and never look back.

The event marked the first time TPC Southwind had hosted a World Golf championship event. The PGA Tour has held events in Memphis every year since 1968; however, this is the first year of the current event.

FedEx, the presenting sponsor of the PGA Tour, brought the World Golf Championship from Akron, Ohio, where it had been hosted the past several years, to Memphis, right next to the FedEx World Headquarters. With it came more fans, better golfers and a much-improved purse. Dustin Johnson, the winner of the 2018 FedEx St. Jude Classic, took home $1.19-milion a year ago. Today, winning the WGC-FedEx St. Jude Invitational, Koepka pockets $1.75-million. The total purse jumped from $6.6-milion paid out to all golfers all the way to $10.25-million.

For Koepka, the World Golf Championship is another check mark in a long string of recent accomplishments. He’s won four of the past ten majors and now six PGA Tour events since winning the U.S. Open in 2017. Now, he’s won at one of his favorite courses on tour.

“It’s special. The last few years have been unbelievable,” Koepka said. “It’s been an incredible run, been playing some good golf and I’m excited for what the future holds. This place has always been special to me with FedEx being here, St. Jude here. It’s always been a fun place for me to come. It’s always a special place, but to win here, this one is great.”

With the win, Koepka strengthens his lead in the FedEx Cup standings. He led the way entering the week, with a 37-point lead over Matt Kuchar. Now, he holds a 134-point lead over new No. 2, McIlroy. Only three more events remain before the TOUR Championship on August 22 in Atlanta to end the year’s calendar.

Robert Nkemdiche cut by the Arizona Cardinals after showing…