With the eyes of Memphis on Koepka, the world’s No. 1 shines 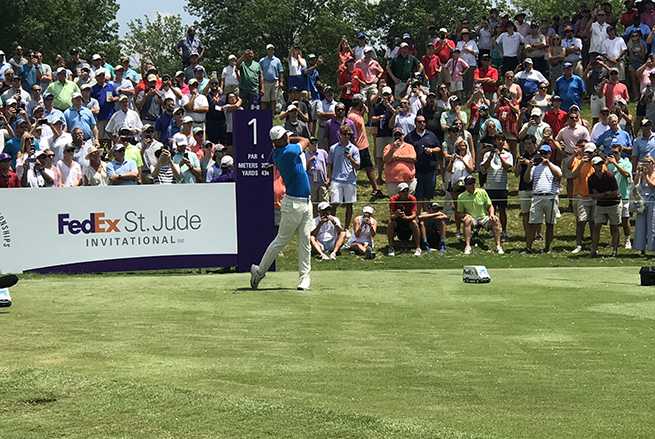 Brooks Koepka tees off on Hole 1 in the final round of the WGC-FedEx St. Jude Invitational at TPC Southwind on Sunday, July 28, 2019 (Jake Thompson).

Having the eyes of the golfing world focused on the Bluff City is nothing new, Memphis is a regular stop on the PGA Tour. But this year was different. This year, the tournament formerly known as the FedEx St. Jude Classic received an upgrade, turning into the FedEx St. Jude Invitational and one of the four World Golf Championship events.

The field was the best of the best in golf today and Sunday’s final round exemplified that fact. From 8 a.m. to 1 p.m. there were pairings featuring, as the marketing all week stated, world-class players. Future and current hall of fame golfers were scattered throughout the tee times, but none was more anticipated than the final pairing.

After three days of navigating TPC Southwind the field was set for Sunday and the last two golfers to go off just happened to be two of the top three players in the world. Memphis could not have asked for more.

Brooks Koepka is the No. 1 golfer in the world, and Rory McIlroy is right on Koepka’s heels sitting at No. 3. Before the pair even hit their first golf ball, history had already been made in Memphis. It marked the first time the two had ever been grouped together in a final round.

With the gallery slowly growing with each group that passed through the opening hole so did the anticipation. Then the moment finally came as the clock struck 1 p.m. local time. Keopka entered the tee box first from the practice area with McIlroy close behind. The masses seemingly more in the Irishman’s corner than the American’s.

Then play commenced with a relatively quiet start in comparison to the excitement of having McIlroy, who shot an 8-under 62 on Saturday to earn a spot in the final group, and Koepka who has been lighting up leaderboards all year. Then Koepka showed why is the world’s best with a birdie on No. 3, setting off what would become a bogey-free 65 in the final round to clinch his third win in 2019.

McIlroy, who was coming off an underwhelming performance in his native country of Ireland by missing the cut in last week’s British Open, could never provide any fireworks. He shot a one-over 71 on Sunday to finish five shots back after leading the field by one the day before.

Others tried to vault up the leaderboard and put pressure on Koepka. Webb Simpson had the best effort with a six-under 64 to finish three shots back. The Florida State University alum was not going to be denied his first WGC title, and in doing so, tightened his grip on that No. 1 ranking.

Robert Nkemdiche cut by the Arizona Cardinals after showing…