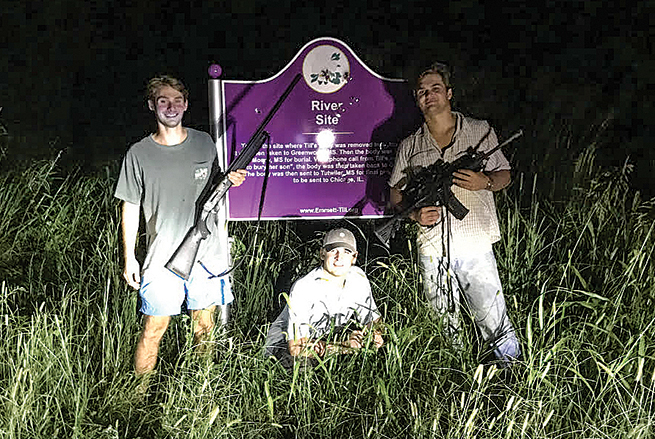 Last week a report came out of a photo picture three University of Mississippi students posing with guns in front of the Emmett Till historical marker.

Since then, the students have been suspended from the Kappa Alpha fraternity and more groups have come out condemning the photo.

Over the weekend, Ole Miss’ Associated Student Body and Black Student Union sent out a joint statement regarding the photo. The school was made aware of the photo in March, when it was taken and posted on Ben LeClere’s private Instagram account.

The University did not take any action on the students, stating it did not violate the school’s code of conduct because it occurred “off campus and was not a part of a University-affiliated event.”

“While the actions of those students may not directly violate the university’s code of conduct, the actions and photo are a direct violation of the University’s Creed,” the statement reads. “As it stands, the UM Creed is not an actionable plan, but a set of beliefs pledged and upheld by every member of the UM Community. The behavior exemplified by the students in the photo disregards the pledge ‘to believe in the respect for the dignity of each person’ as voluntary members of our community, and it disrespects the dignity of a significant population of our campus community.”

The marker honors Emmett Till, who was murdered in August 1955 after a lady claimed the 14-year-old African-American boy grabbed her and was sexually crude to her. She recanted those claims in 2017 during an interview with a Duke professor. An all-white, all-male jury acquitted two white men.

On Monday the Oxford-North Mississippi Chapter of the League of Women Voters also sent out a statement following the news of the photo’s existence.

“The League of Women Voters of Mississippi condemns the behavior of the three University of Mississippi students depicted in an Instagram photograph that surfaced recently, in which they are shown grinning and clutching guns while posing next to a bullet-ridden memorial sign for Emmett Till,” the statement read. “We urge other organizations and individuals who share our position to speak out against this behavior, and we call for strict disciplinary measures by the University for those depicted in the photograph.”

On Saturday, Mississippi Governor Phil Bryant issues his first comments regarding the photo via his Twitter page.

“I am deeply saddened by the choice made by the three students to pose in such a thoughtless and disrespectful way at the Emmett Till historical marker,” Bryant said. “Mississippi has made significant strides toward racial reconciliation, and such despicable actions are not representative of the progress we have made.”

Since being installed in 2011 the sign has been vandalized on multiple occasions, with the most recent incident being in August of last year. Over the weekend the Emmett Till Memorial Commission announced the marker has been taken down and will be made bulletproof.