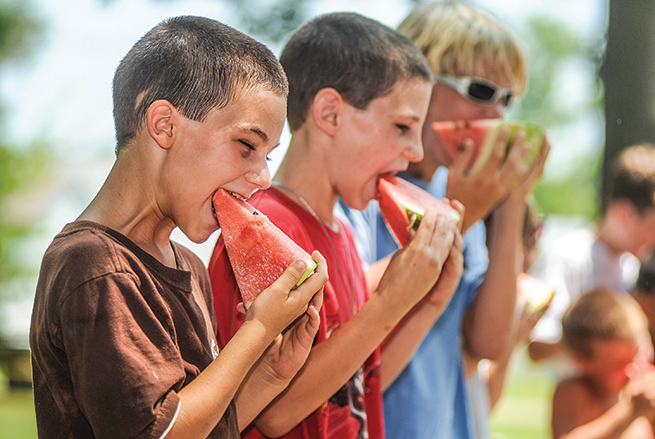 National Watermelon Day was Tuesday, but the city of Water Valley is hoping Saturday will be a world record day in its own right.

During the 50th-annual Water Valley Watermelon Carnival, there will be an event to try and set a new Guinness World Record for the largest watermelon-eating contest.

The idea came when carnival committee member Tonya Eubanks wanted to add something new to the carnival. Eubanks has been involved with the Watermelon Carnival the past 19 years and started entertaining the notion of beating a world record of some kind a few years back.

“Three or four years ago, I thought about beating a record, but I always ran out of time to apply for it,” Eubanks said. “In January, we formed a 50th year Watermelon Carnival committee, so I thought about it earlier. I looked to see what there was involving watermelons and something that we could do and I found the watermelon eating contest.”

In order to have an official world record attempt, the event must be applied for and registered with the Guinness World Records office no more than 12 weeks prior to the event. Once the committee was formed in January, Eubanks went ahead an applied for the August event.

The current world record was set last year in Safety Harbor, Fla., when 259 people gathered to eat watermelon at an event called “Melons for Moolah,” which raised money for local charities, on July 1, 2018. To set a new world record 13 months later, Water Valley only needs 260 people. However, Eubanks said she is expecting participation to be closer to 1,000 people, giving the town the chance for their record to last a little longer than the previous one.

“I thought we could double or triple that easily,” Eubanks said. “So, that’s our goal is to at least double it so they can’t turn around right back and beat us and we go back and forth. We are planning for 1,000 people. For some odd reason, we really think we’re going to have 1,000 people.”

Eubanks and other event organizers are capping the number of participants at 1,000 due to not having enough watermelons to accommodate a larger number. The world record attempt will take place at the Crawford Sports Complex, located on South Main Street in Water Valley. Starting at 5:30 p.m. on Saturday, people will be allowed to enter the baseball field where they will be counted and held until the event begins at 7 p.m. once they have signed in.

There will not be an official from Guinness World Records in attendance; bringing in an official would be an additional fee Eubanks and organizers chose to not pay. There is a 30-page instruction manual, which details how to provide evidence of a world record being broken. To comply with the manual, a production crew will be present to video proceedings. Three drones will also be overhead in an effort to capture every angle. A camera will be pointed at the entrance gate to help corroborate the number of people counted as they walk onto the field.

The 50th Watermelon Carnival takes place this Friday and Saturday, August 2 and 3, with the arts festival being held on Saturday morning at the Water Valley city park. There will be live music on two stages, as part of added items to celebrate the milestone year.