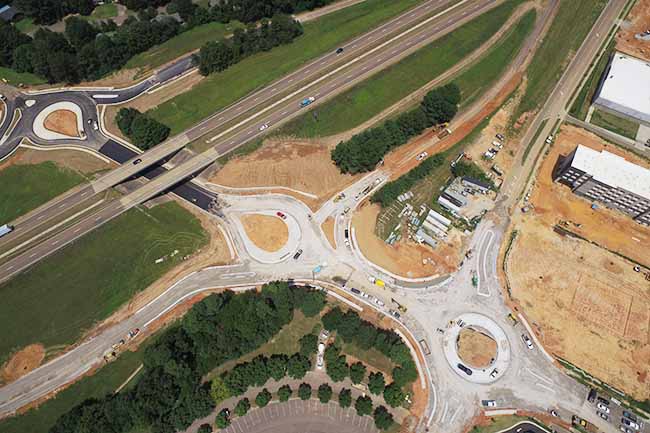 Work continues on the roundabouts on Sisk Avenue next to Highway 7, in Oxford, Miss. on Wednesday, July 31, 2019. (Joey Brent)

The City of Oxford has experienced its fair share of construction projects and infrastructure improvements throughout the summer, but a couple of those are nearing completion.

One of those is the West Oxford Loop Extension project, which connects Anderson Road to College Hill Road. It is the first phase in a multi-step roadway project, and is going to be open to motorists starting today.

The city announced the opening via a social media post on Wednesday, and noted a ribbon cutting ceremony will take place at the new road at 1 p.m. on Aug. 8.

“The wait is over! We are proud to announce the opening of West Oxford Loop Extended,” the post read on the City of Oxford’s Facebook page. “This road has been many years in the planning and construction. Please use caution as you drive this beautiful new road.”

While the city is excited about one project finishing up, there is another project on the other side of town that may cause issues once school resumes next week.

The Sisk Avenue roundabout project is nearing two months since the project began, and when asked by the EAGLE, city officials could not give a clear indication as to when it will be completed. There are roundabouts under construction at the north and southbound exits of Highway 7, with a third roundabout being installed just to the east, in front of the Oxford Conference Center and Malco Oxford Commons movie theater.

“Due to how quickly things are progressing and changing, we have been waiting as long as possible so that we can give the most accurate information,” Reanna Mayoral, the city’s engineer, told the EAGLE.

Two of Oxford School District’s schools are located on Sisk Avenue – Della Davidson Elementary and Oxford High School – and teachers are scheduled to return this week with classes beginning on Aug. 7. When Oxford’s Board of Aldermen approved the project in May, it was under the condition that the project would be completed by Aug. 4. Another condition was that F.D. Buddy East Parkway would be completed, allowing another way for teachers, students and buses to get to Sisk Avenue and the schools.

Magee detective charged in connection with shooting on the…