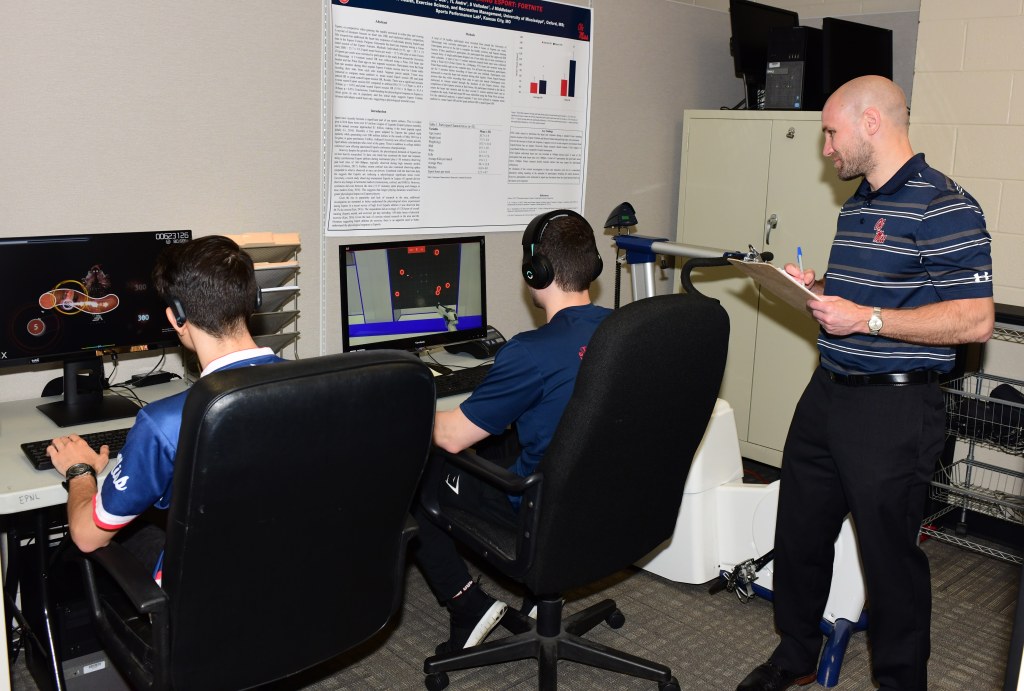 Love to hate gaming all you want, but the winner of the Fortnite World Cup earlier this month made more money ($3 million) than the winner of this year’s Wimbledon Championship ($2.85 million) and Masters Tournament ($2.07 million).

The popularity of esports is skyrocketing, and there’s no way around it. Research indicates the esports economic impact will surpass $1 billion for the first time this year. Over 450 million people globally participate in some way. With the numbers and popularity blowing up, researchers at the University of Mississippi have begun looking into the health implications of competitive video gaming.

Thomas Andre, an assistant professor of health, exercise science and recreation management, has always focus his research of fitness, exercise and nutrition. A gamer as a hobby, he started noticing some of his research elements playing out in himself.

“It was just a little bit of a side hobby, as a way to stay in touch with these guys I did undergrad with, playing video games online,” Andre said. “I started noticing what was happening to my own body, like poor sleep, elevated heart rate; I could feel myself not blinking as much, my breathing would get shallow. We started thinking, ‘Oh let’s start looking into this,’ as the industry has been growing.”

Andre and his team of other researchers who enjoy gaming started measuring heart rates of the Ole Miss Esports teams as they played six different games competitively at the inaugural Esports Egg Bowl in October 2018.

They then presented their research at this year’s American College of Sports Medicine conference. Their results showed that, while gaming, players had similar accelerated heart rates and recovery periods as competitive athletes during exercise.

“These guys are only playing for maybe 30 minutes and the peak heart rate is like doing a max test,” Andre said. “The heart rate response is similar to what we see in all-out aerobic fitness assessment where heart rates are hitting 190, 200, and we saw that with these guys sitting while they are playing. So, there is a clear stress response. We hadn’t seen anything in the literature on it, so that was exciting.”

Esports is clearly growing, and doing so very fast. Major cities around the US are building arenas for esports. The Luxor Casino in Las Vegas has a big esports arena, as does Philadelphia, Penn., with the new Comcast Esports Arena.

This presents opportunities for competitors – as it’s clear to see, these competitions have massive prize pools – but also for some others that the public hasn’t really thought much about yet. The growing field leads to the players needing other recourses that people think more of for traditional sports: athletic trainers, physiologists and strength coaches.

“The industry has grown so quickly that little research has been conducted on the sport’s effect on the human body,” Andre said. “There are a lot of injuries – wrist, neck and hand injuries, some muscular forearm extensor and flexors – so eventually, as it grows, people are beginning to realize it’s not just ‘sit down and play.’ It has a lot more to it.”