Young linemen prepared to step up in wake of Givens injury 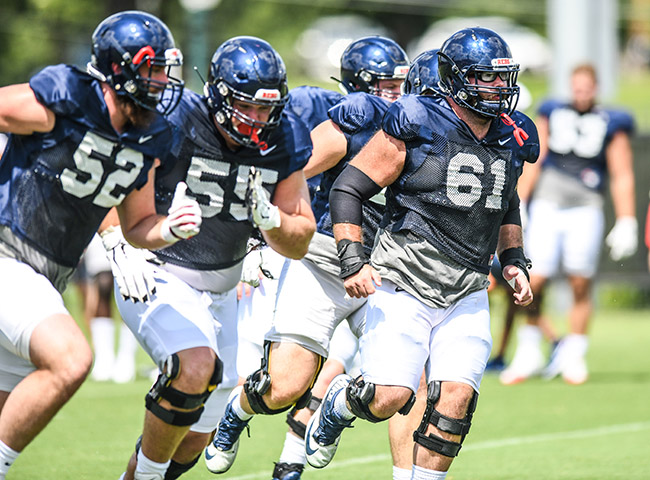 Ole Miss needs Alex Givens. But at the same time, they were going to need others to step up even if he was healthy.

Givens, Ole Miss’s top returning, and most experienced, offensive lineman had back surgery over the summer. The team expects him to play when Ole Miss opens the season against Memphis on Aug. 31, but when fall camp opens, he’s going to be limited.

For now, the plan is life without Givens.

“We’re just hoping for the best right now and hoping (Givens) can be healed as quickly as possible,” junior Eli Johnson said. “He’s our most experienced guy. So obviously with him out, it’s a loss. But I don’t think it’ll affect the way we communicate or the way we play. I’ll take responsibility of that. It’s now my job to make sure everyone’s on the same page.”

Johnson is now the de-facto leader of the unit. A lot of the presumptive starters – Johnson, Royce Newman and Bryce Matthews – aren’t that young. They’re juniors, they’re just inexperienced. Michael Howard, who has been getting first team reps at right tackle with Givens out, is also a redshirt junior. But he’s never made a start. But it’s just not a position grouping that has much depth. Ole Miss signed seven offensive linemen in its 2019 recruiting class, and now, they’re going to need some to be ready quicker than usual.

“I was devastated when I heard (about Givens),” freshman Nick Broeker said. “He’s a great asset to the team and does a lot of things. But then it really came upon me that I might have to play. So, it was a lot of thoughts.”

Broeker was a name coach Matt Luke singled out specifically when talking about filling the hole left by Givens. At 6-foot-5, 290-pounds, he could afford to gain some weight, but he’s bigger than most freshmen who come in right away. That should give him the edge if they need him to play from the start. Ole Miss’s top offensive line signee, four-star Darius Thomas, is dealing with a recently discovered heart condition, and is out indefinitely.

“I’ve really been impressed by all the freshmen. That said, it’s really hard to evaluate until you put the pads on,” said offensive line coach Jack Bicknell, Jr. “Football is really physical and you have to see these guys and evaluate them in pads. Because we’re going to have to use them, but right now we just want to see them come camp.”

Even if Alex Givens were here and healthy, Ole Miss would need something from these freshmen. Rich Rodriguez likes to run. Ole Miss is going to play fast. In the past, he said he likes to play eight or nine different linemen every single game. That means it’s likely more than just Broeker among the freshmen who will see playing time.

As of now, the team has no plans to redshirt any of these linemen. That could clearly change, and likely will, as camp rolls along. Right now, it’s just reps and for some of the guys trying to get to a weight needed for the position to play in the SEC.

“Offensive line is a slower-developing player than other positions, so that will be interesting. But I’m looking forward to camp to see them work,” Johnson said. “They all look good coming out of high school, but you never know. You can’t really tell until the pads get thrown on.”

SEC football is considerably more physical and tougher than high school, that much is obvious. These 18-year-old players are going to line up across from guys like Auburn’s Derrick Brown, who are going to be first-round picks in the NFL just eight months from now.

That said, it’s not a completely new deal. Laremy Tunsil started at Ole Miss as a freshman. Obviously, at 6-foot-6, 300 pounds and the top high school lineman in the country, it’s a little different. But regardless of the youth, Ole Miss is excited about the young crop of linemen coming in.

“Young is one thing, and we are young. But you can still be very talented and be young,” Bicknell Jr. said. “So obviously, this will be a huge preseason camp to get those guys ready.”