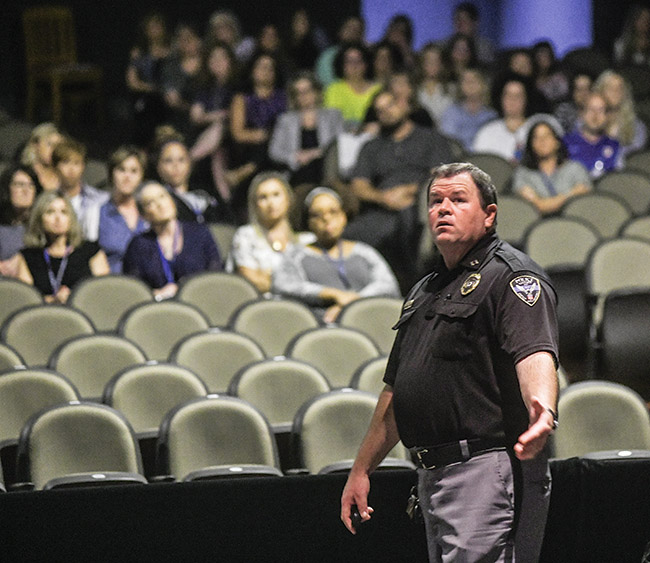 In the wake of this weekend’s mass shootings in El Paso, Texas and Dayton, Ohio, the Oxford Police Department is holding an active shooter training session this week.

The Active Shooter for Civilians Training session will take place on Thursday from 6 to 8 p.m. at the OPD Training Building.

The sessions are offered each year by OPD Captain Alan Ivy, but after the shootings this weekend, the department chose to be proactive in refreshing the citizens of Oxford on what to do if tragic events such as the El Paso or Dayton shootings strike their town.

Oxford residents do not have to sign up or pay a registration fee for the free training session. During the two-hour training, Ivy will discuss with attendees about what they can do if a mass-shooting event occurs and how to act in order to save their own lives as well as others.

“We teach having a plan. We teach kind of mentally scripting ‘What would I do if?,’” Ivy said of the training. “(We teach) no matter where you are, whether it’s church, Walmart, a concert or wherever, kind of having a plan. Not living paranoid, but having a plan because the hesitation is what gets a lot of people killed – and the not knowing what to do. A lot of people will freeze and be easy targets and you kind of want to have a plan.”

Thursday’s session was not scheduled prior to this past weekend’s events, but was deemed necessary after discussions between Ivy and interim Chief Jeff McCutchen. Ivy did have an active shooter training session with the Oxford School District, which was previously scheduled, on Monday in preparation of the new school year beginning on Wednesday.

The two crime scenes in El Paso and Dayton are both similar to popular locations in Oxford. On Saturday morning, a gunman opened fire in an El Paso Walmart parking lot before moving inside the store, killing 20 and wounding 26 others before he surrendered to authorities. Less than 14 hours later, another gunman opened fire in a historic and entertainment district of Dayton outside of a local bar and restaurant, killing nine people. The shooting in Ohio took less than 30 seconds before local authorities neutralized the gunman.

The training offered by OPD is not exclusive to citizens of the LOU Community. In addition, OPD has organized internal training sessions for officers multiple times a year, to help them prepare and be ready for a shooting incident of any kind.

Just last week, OPD held one of those training sessions.

“You have to practice those skills. You have to talk about how you’re going to respond,” McCutchen said. “We debrief a lot of times when these incidents are closed, so we can look at what went right and what went wrong and how can we best prepare for one of these incidents.”

With Oxford near reaching full capacity, and the Downtown Square the epicenter of nightlife entertainment, similar to the Oregon District in Dayton, Ivy said OPD wants as many people as they can to understand potential dangers and be prepared.

“The open venues and stuff like that is very difficult, because you’re not going to have much warning,” Ivy said. “It’s going to hit you by surprise; then you’ve got to react fast. That’s the whole key. You’ve got to have a plan in your establishment, ‘OK, where do I get people? Where do I go? How do I secure doors?’ and it’s got to be done beforehand. If you wait until the time (a shooting happens) you can’t think, you can’t do those things. Your stress level is too high.”

With mass shootings occurring so frequently, and with suspects’ methods for harming others evolving, the local authorities are also having to evolve and adapt their training sessions to match what is taking place in these incidents. Ivy said that, every time a mass shooting happens in the U.S., the department goes back and examines the evidence to see how it can better train residents in the event a similar tragedy strikes in Oxford.