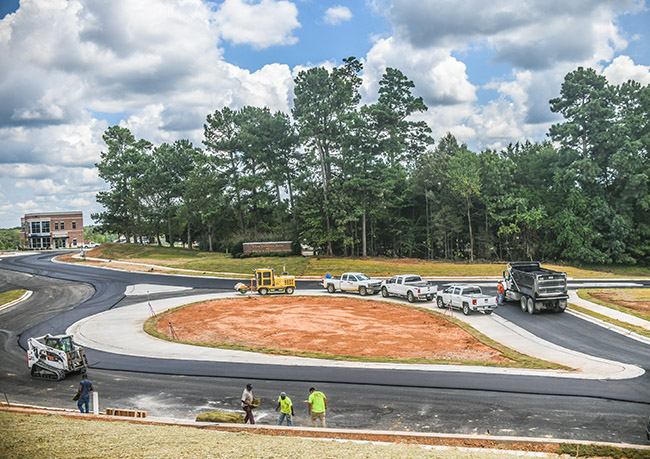 Work continues on the Sisk Avenue and Highway 7 road project in Oxford, Miss. on Monday, August 5, 2019. The Sisk Avenue interchanges at Highway 7 and Ed Perry Boulevard will re-open to traffic on Tuesday, August 6. The three new roundabouts will be single-lane similar to South Lamar until final striping is completed in the coming weeks. The northbound on ramp to access Highway 7 towards Holly Springs will remain closed until the asphalt and shoulder work is completed. (Bruce Newman, Oxford Eagle via AP)

After nearly two months of closures and construction, Sisk Avenue is primed to re-open to motorists.

The City of Oxford announced on Monday that the Sisk Avenue interchanges at Highway 7 and Ed Perry Boulevard will re-open to traffic on Tuesday.

The opening comes just in time for Tuesday’s primary election and for the beginning of the 2019-20 school year on Wednesday. The Oxford Conference Center serves as a voting precinct and teachers are beginning to report to Oxford High School and Della Davidson Elementary, all three of which are located off Sisk Avenue.

The three roundabouts will not be fully operational at the time of the re-opening. All three will be single-lane, similar to the roundabouts at the South Lamar and Highway 6 interchange. They will remain single-lane until all striping of the lanes has been completed, which should be sometime in the coming weeks, per an announcement made by the city on its social media accounts.

To help with traffic flow, officers with the Oxford Police Department will be on site to assist motorists.

The roundabouts will have barrels placed to help mark the lanes for traffic flow. There will also be OPD officers working a 12-hour shift on Tuesday, starting just before polls open to shortly before they close, per McCutchen.