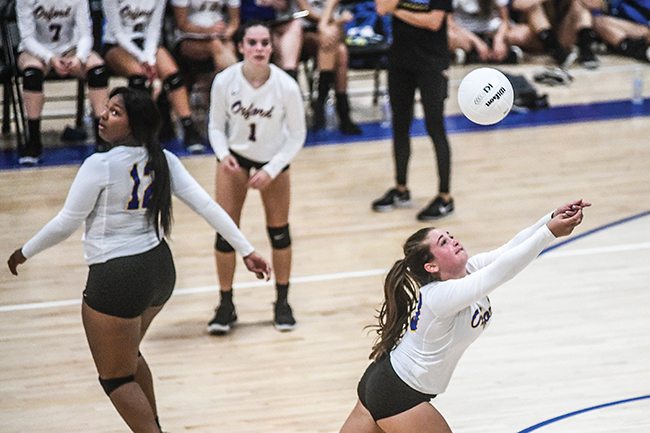 If one wasn’t in attendance, they might not realize how close the games were when Oxford topped Lafayette 2-0 on Tuesday evening.

Final score aside, the Commodores got off to an early start, a 6-1 lead to open the night. A lot of emotions flowing early, Oxford head coach Kacie Hengler used a very early timeout to ease her girls’ nerves.

“I just told them to calm down. They were a ball of nerves, so nervous,” Hengler said. “Half of them never even experienced a starting varsity game. So with the National Anthem and all of the hype before the game, they were nervous.”

The Chargers rallied behind that timeout, coming back to tie the opening set at 11 and taking their first lead at 14-13. The Oxford run extended all the way to a 20-14 lead, tied for the largest either team would have on the evening, before eventually winning 25-19.

It seemed like Lafayette may have been dejected after dropping their early lead, but they found a way to rally back late in the second game. With Oxford up 13-8, the Lady Commodores rallied back, taking their first lead at 17-16. From there, it was one of the most back-and-forth volleyball sets imaginable.

“Mental toughness was big. You’re going to make a lot of errors at this game. They’re still learning the game and learning their own bodies. They did a really good job of making errors and coming back and still being aggressive.”

Oxford made some of those errors but found ways to stay alive. A little chip shot from Kailey Gooch put the Commodores up 23-22 and from there, it almost didn’t end. The set was tied at 24, 25 and 26 before Oxford put down the closing hammer to win 28-26.

“We were just one step away from where we need to be to compete on every ball,” Lafayette head coach Clint Jordan said. “That is youth; that is inexperience. You’re competing for the first time and the game is moving really fast. I was proud of my girls, especially the newer ones for how they competed.”

In the end, the game doesn’t mean all that much outside of wanting to blow out your crosstown rival. The teams played an abbreviated three set match to start the year, a game that won’t count against either’s chances of making the playoffs down the road.

Really, for two young teams that replaced several players from a year ago, games like these are just about getting better. In many ways, the coaches are still learning what they have with these young girls and learning where to play them. The girls themselves may still just be learning to adjust to the pace of varsity volleyball.

“It was good to compete and to play someone other than ourselves,” Jordan said. “We know Oxford is going to be a good team. They’ll be in the mix for a playoff spot, but we need to get better and we need to get better quickly. Playing the Oxford’s of the world, we set our schedule up to challenge everything we do so that we can adjust and get better.”