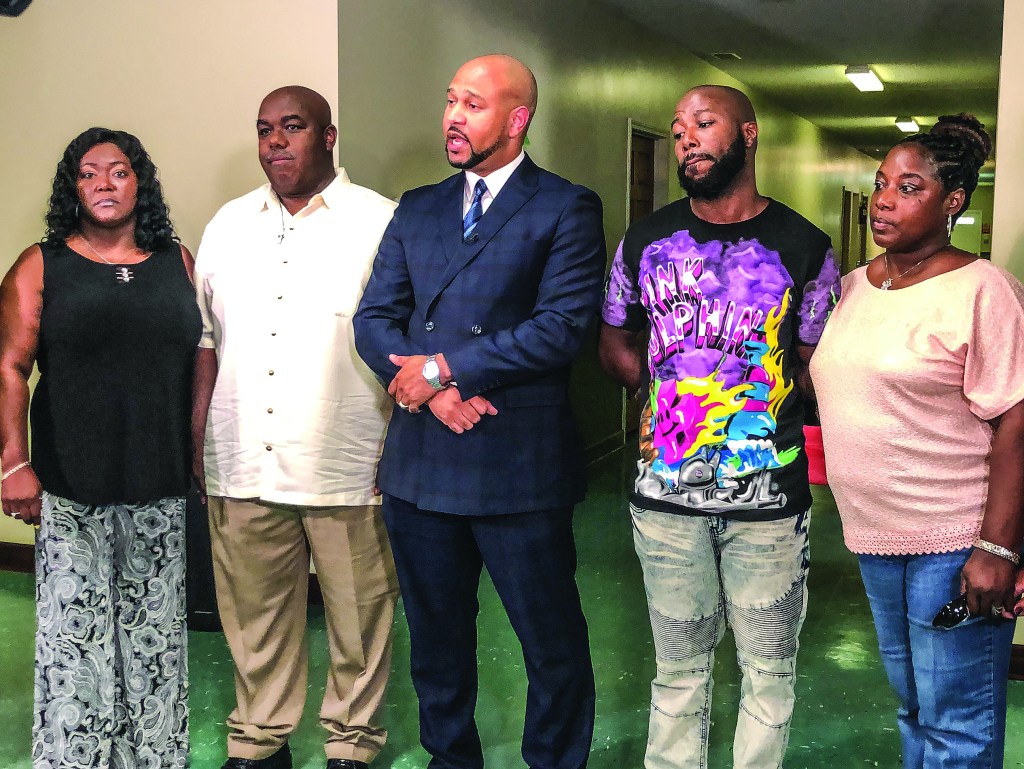 David Logan, second from right, stood with his family members as attorney Carlos Moore addressed rally attendees and members of the media at a pre-rally press conference on Monday, Aug. 5, 2019. Moore filed a lawsuit against former Yalobusha sheriff W.F. Humphreys and others on Feb. 12, 2020.

David Logan, the 28-year-old Water Valley man who sustained injuries during an altercation with law enforcement officers on July 18, appeared at a prayer and justice rally held in his honor Monday night.

Logan has been described by Yalobusha County Sheriff Lance Humphreys as a “full back” former Water Valley High School football player. Humphreys said one of his deputies compared attempting to subdue Logan to “trying to hold down a 250-pound calf.”

However, the figure that stood before nearly 100 people at Spring Hill North MB Church in Water Valley was a tearful man, 5 feet, 9 inches tall and maybe 170 pounds. Logan stood hand-in-hand with his parents and family members as his attorney, Carlos Moore, addressed rally attendees.

“A man with a suspended driver’s license was beaten to a pulp, almost killed,” Moore said. “He was unarmed. He immediately told them he did not have a valid driver’s license. And to be beaten within an inch of his life is uncalled for. We are here today to announce we are seeking justice and the prayers of this community.”

Moore recounted the events of the incident once again, providing more details and context to the story. The vehicle Logan was driving, for example, belonged to his sister, Moore said. He also went more in-depth in describing the injuries Logan sustained, saying his left eye socket sustained orbital fractures, he had a severe concussion that resulted in headaches, he now has difficulty chewing without pain and has double vision, which as of yet has not subsided.

In describing the events that transpired the night Logan was stopped at a routine roadblock, many of Moore’s statements aligned with the account dictated by Humphreys to the EAGLE and other media outlets. For example, he said, at one point his client did attempt to flee from officers.

“This man got out of the car and attempted to walk in the opposite direction of the cops. They assumed he was about to flee, and they jumped him, took him to the ground, got on his back, choked him unmercifully and would not give him any relief,” he said. “The man told the officer that was choking him several times that he could not breathe. ‘Please do not kill me.’”

In a previous interview, Humphreys said officers acted in this way because they were still unsure, at that point, whether or not Logan was armed. However, Moore disagreed, saying he was essentially naked by this point in the incident.

“They… knew he did not have a weapon at this point, because where was he going to hide it?” he said. “This man, afraid of the cops now, he knew at this point they were not there to protect and serve, he tried to run away again – this time, not toward the officers, but away from them. And this time, while he was in handcuffs which is clearly against the law, waylaid him to the face again.”

A deputy who had been on-site during the scuffle discouraged Stark from transporting Logan via ambulance to the hospital, Moore said, a violation of hospital policy. Moore said Stark was fired from Yalobusha EMS as a result on July 30, but a Monday night Facebook post on Stark’s personal profile states that he is still employed there.

A call to Yalobusha General Hospital and Yalobusha EMS to confirm Stark’s employment was not returned.

It wasn’t until Logan arrived at Regional One Medical Center in Memphis, his attorney said, that a doctor let him use his cell phone to call his mother and let her know what had happened to him.

In response to claims made by Humphreys that Logan was under the influence of a substance suspected to be ecstasy or methamphetamine, Moore said the statements were “right-out lies.”

He also denied that a baggie of drugs was thrown out of the car window by Logan ahead of him stopping at the roadblock.

Moore could not confirm or deny the injuries of two sheriff’s deputies, but he did say the only person treated by paramedics or transported via ambulance that night was his client.

Logan’s father, Wesley Logan, also addressed attendees, saying at the end of the day, the situation could have been much worse.

“Every time I hear this, every time I read it… it doesn’t anger me, but it hurts to know he had to go through that, for him to keep having to live through this each day,” he said. “It could’ve been so much worse. We could’ve been burying him. Every time Mr. Moore contacts me about something, I’m thankful it wasn’t worse.”

Moore decried white supremacy throughout the event, comparing the treatment of Logan to the treatment of the white perpetrator of the mass shooting in El Paso, Texas, who was apprehended by authorities without incident.

He criticized Humphreys’ response to the issue, saying he “would have done better” to stay silent and ask for a “full and impartial investigation.” Moore also revealed that he was working with the FBI to further investigate.

“I believe it was attempted murder, so … I called an FBI Agent that I’ve known for years who has been investigating a lot of the civil rights cases I’ve worked on over the years,” Moore said. “He came by the office today and started his investigation. He interviewed Mr. Logan and is ensuring all the facts are being reviewed by the best law enforcement in the country. What they did was a crime and they need to be held accountable.”

The rally began and ended with prayers from Pastors Sammy Townes and Calvin Hawkins, Jr., who is also running for justice court judge.

When Townes gave a benediction to close the event, he called for unity in the midst of division.

“It’s (Logan) today, but it could be someone else tomorrow. Unity is a good thing, when it’s utilized in the right way,” Townes said. “We want the truth to come forward. It’s important that we seek truth and we seek justice. It is our prayer that this does not happen to another person, whether they’re black, white Mexican… nobody.”