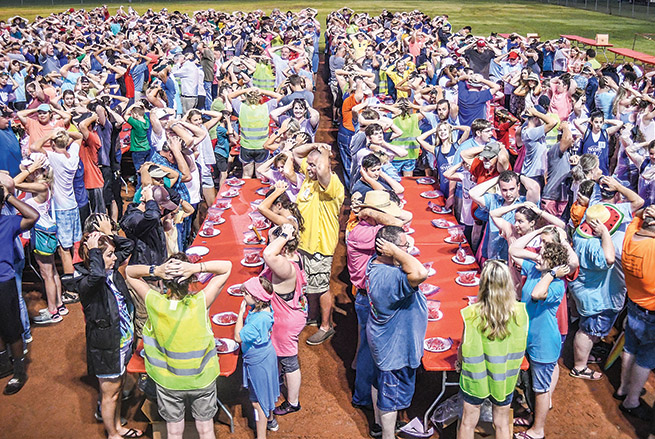 Contestants get ready to participate in a watermelon eating contest during the 50th annual Watermelon Carnival in Water Valley, Miss. on Saturday, August 3, 2019. Water Valley has officially set the Guinness World Records mark for the Largest Watermelon-Eating Contest with 754 participants competing simultaneously, beating the record set in 2018 in Safety Harbor, Fla, which had 259 participants. (Bruce Newman, Oxford Eagle via AP)

Water Valley held the 50th Watermelon Carnival this past weekend, and to commemorate the milestone, etched the town’s name into the record books.

Residents of Water Valley, along with visitors from across the country, descended upon the Crawford Sports Complex Saturday night to form the world’s largest watermelon-eating contest, unofficially setting a new Guinness World Record.

The town of Safety Harbor, Fla., which had 259 people eat watermelon simultaneously during an event last summer, holds the current world record. The unofficial number of people who ate watermelon in Water Valley on Saturday night is 754, but event organizers anticipate the official number could drop by around 15 due to various reasons, including participants leaving during a summer storm that popped up prior to the event.

Eubanks said that while most participants were from Water Valley, the contest did have people from as far away as Las Vegas and New York in attendance.

Saturday night’s event had more excitement around it than originally anticipated, with Mother Nature trying to play spoiler. Thunderstorms arrived in Water Valley around 6 p.m., but Eubanks was in constant communication with emergency management officials in case the weather turned out to be too dangerous. The rain eventually subsided and the watermelon-eating contest world record attempt began shortly after 8 p.m.

Each year, the carnival holds a watermelon-eating contest and Saturday night was no different, with Deunte Ragland of Water Valley winning this year’s record-setting contest. With groups of 20 people at tables set up in the infield of one of the baseball fields, the first person to eat their bag of watermelon the fastest in each group advanced to the final round.

“Just a handful at a time,” Ragland said of his strategy. “It feels good.”

Now the process of documenting and certifying that Water Valley did indeed set a new world record begins. There were several members of local media serving as evidence collectors, and three drones flying overhead to capture video and photos of participants. The Guinness World Record office also requires at least two counting methods to also help confirm the number. Eubanks and her team have up to a year to send in their evidence, but she said she anticipates sending the results within the next 60 days.

Getting official word that Water Valley is now the king of eating watermelon could still take up to a year. Regardless of whether the record stands or is broken by another group, Eubanks said she and the other organizers are prepared to reclaim the crown if need be in the near future.

“We hope to hold onto (the record) for a while, but now that we’ve done it, we know how to do it and what to change and worked best and what worked better,” Eubanks said. “If they beat us in five years, I think we can get our thousand people if it doesn’t rain.”