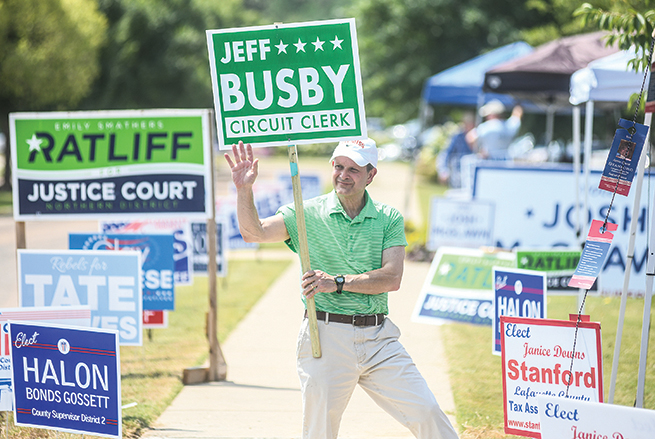 Family traditions continued and got one step closer to continuing after Tuesday’s primary elections.

Several county and state races were narrowed down for November’s general election, while some will have to be whittled down in three weeks due to runoffs.

The one contested race that was going to be decided following the primaries was Lafayette County Circuit Clerk. Current circuit clerk Baretta Mosley is retiring after this year and did not seek re-election. Her replacement will have a familiar last name to residents of Lafayette County, with Jeff Busby taking home nearly 80 percent of the vote, defeating Karen Curtis Borden who received 876 votes to Busby’s 3,495.

Busby will take over the position his mother filled for over two decades before her retirement in 2011. Tuesday night’s win overwhelmed Busby, who said he was grateful to have the opportunity to continue to serve the county.

“It’s humbling. Very much so,” Busby said. “Jeff Busby didn’t do this by himself. It was my wife, family, friends that stayed beside me and led me and prayed for me through this whole ordeal. I’m humbled by the people of Lafayette County who have that much confidence in me. I’ve enjoyed my time as District 2 supervisor. …I look forward to continuing to serve in a different role.”

The race for Lafayette County Sheriff will be between Joey East, who won the Democratic primary with over 80 percent of the vote, defeating Raymond Westley Sides, and Independent candidate Jeff South. The two will face off in November. East is trying to fill the position his father, “Buddy” East, held for over four decades.

“It’s just a great feeling knowing you’ve got 80 percent of the people who support you,” East said. “I’m floored. I’m just really kind of speechless. I’m just taking it all in and enjoying it. I know my dad is smiling down on me.”

The race to decide who will run in November to replace Busby as Lafayette County’s District 2 supervisor will go to a runoff in the Democratic primary. Ava Halon Bonds Gossett and Joshua T. McGlawn will square off in a runoff in three weeks. The winner will face Larry Gillespie, who narrowly defeated Chad Mills in the republican primary, following absentee ballots being counted.

Another runoff will determine the Democratic candidate for District 4, who will run against Derek Mooney in November. Incumbent Chad McLarty, who received 39 percent of the vote, will go against Duncan Gray (32 percent) in a runoff on Aug. 27.

In the race for District 1 supervisor, democratic candidate Brent Larson will have to wait to see whom his opponent will be in November. A runoff in the Republican primary is needed to determine a winner with the race between Harold Brummett and Adam P. Clay. Clay received 40 percent of the vote (393 votes) with Brummett receiving 31 percent (302). Larson ran unopposed in Tuesday’s primary.