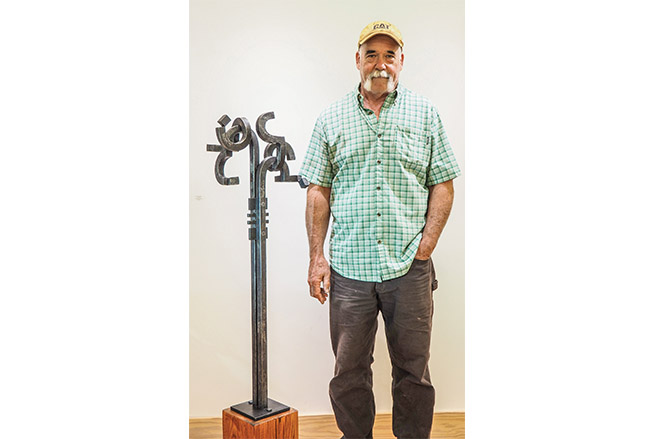 Another Oxford artist has been selected to receive a grant from the Mississippi Arts Commission.

Walter Neill was awarded a $4,000 fellowship from the MAC. The grant is a portion of the $1.4 million in grants the Commission has awarded in 2018-19. Neill joins Earl Dismuke as the second sculptor in the Oxford community to receive a grant from the MAC this year. This was the first time Neill applied for a grant. When he is not working on his craft, Neill helps run the Oxford Treehouse Gallery with his wife, Vivian.

“I was totally honored. I really was,” Neill said.

A portion of the money will go toward allowing Neill to attend the International Sculpture Conference in Portland, Ore., with Dismuke in October. The rest of the fellowship grant money will help Neill expand his work and allow him to create larger pieces than those he is currently working on.

Neill got back into sculpting in 2017 after taking some time away from the art form. Most of Neill’s pieces have been commissioned metalwork. Sculpting was something Neill said he always enjoyed – he previously sculpted pieces in the 1990s when he lived in Jackson –  and had several friends in the sculpting community. However, it was not until a friend in North Carolina asked Neill to build him a larger outdoor sculpture that he began creating again after a long hiatus.

“That’s really what got me started (again),” Neill said. “I really didn’t have any idea what he would want, so I just started making things. Then Earl and I got to be good friends. … Eventually, the guy who wanted the sculpture doesn’t even know he is the one who got me going again.”

Most of the sculptures Neill has completed are placed in the Treehouse Gallery, and he has even sold some of his indoor sculptures.

With all the experience Neill has gained from his previous years spent sculpting, and the knowledge from working in other mediums and in other fields, he said he feels he is capable of working in any sculpture medium he wants.

“I’ve learned a lot of techniques over the years,” Neill said. “I was a plumber. I worked in a tool and dye shop. I knew how to weld. … So, I had a lot of latitude. That’s nice to kind of see it kind of culminating, that experience. I’m glad I took a respite from it, because I’m older and I feel a lot more strongly about the pieces I’m doing.”